Cyclone Idai, the strongest tropical storm to hit Mozambique this millennium, made landfall near the coastal city of Beira during the night of 14 March.

An estimated 1.85 million people were in the path of the cyclone and are now in need of humanitarian assistance. Roads, bridges and other vital infrastructure have been washed away, as have some 400,000 hectares (2,000 square miles) of crops – primarily maize. Other key livelihood sources, like livestock and fisheries, have also been badly affected.

The exact number of victims – currently standing at several hundreds but likely to increase – has not been established yet. The priority now is to prevent further deaths by providing life-saving food and health assistance to survivors.

The World Food Programme (WFP) has rolled out its emergency response in the immediate aftermath of the cyclone, and is aiming to reach 1.7 million affected people. 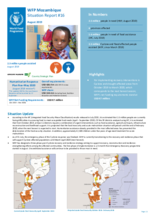