As a result of the severe drought in the Bolivian Chaco and part of Southern region of Cochabamba, WFP will provide humanitarian assistance to 10,000 families – about 50,000 people- for a lapse of six months.

LA PAZ – As a result of the severe drought in the Bolivian Chaco and part of Southern region of Cochabamba, WFP will provide humanitarian assistance to 10,000 families – about 50,000 people - for a period of six months.

The emergency intervention responds to the call of the governorates of Cochabamba, Chuquisaca, Tarija and Santa Cruz. They have turned international agencies such as the WFP for help, after the exhaustion of its own resources in order to continue to respond to the emergency drought.

WFP's interventions will be conducted in 12 municipalities in the four most affected departments. These interventions will be directed through modalities such as food for work and vouchers for work as well as through supplementary feeding for pregnant and lactating women. The total cost of these operations is $ 2.2 million for WFP, of which 57% is funded at this time. The actions are coordinated with other agencies of the United Nations FAO, UNICEF and PAHO / WHO.

WFP, the Department of Civil Defense (VIDECI) and the governorships mentioned before, among other humanitarian actors, conducted last August a comprehensive assessment. By which it was concluded that indigenous and subsistence farmer families had lost an average of 72% of their crops. Thusly humanitarian support, especially food aid, is necessary until the next harvest that will take place between April and May 2014.

The response to the drought has been designed and coordinated directly with the VIDECI and the Ministry of Rural Development and Land (MDRyT, in Spanish) in order to develpe a strategy that will ensure the recovery of  the nutritional and food security of the affected families. 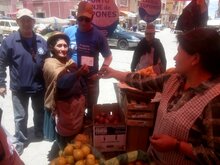 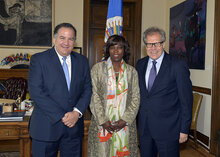 WFP and OAS Team up to Work on Migration, Protection, and Preparedness in the Americas