BEIJING - The Government of the People’s Republic of China has made a contribution of US$10 million towards the United Nations World Food Programme’s (WFP) emergency operations currently supporting El Niño drought-affected people in Ethiopia and Somalia. The Chinese Minister of Commerce, Gao Hucheng, signed an agreement with WFP’s Executive Director, Ertharin Cousin, during the UN General Assembly in New York. Earlier, the Government of China also signed a US$2 million agreement with WFP to support its emergency operations for Syrian refugees in Lebanon and Jordan.

The contribution will help food insecure people assisted through three WFP operations: Ethiopia (US$8 million), Somalia (US$2 million) and Syria region (US$2 million), enabling WFP to provide specialised nutrition supplements to prevent malnutrition in children under five and pregnant and nursing mothers in Ethiopia and Somalia, as well as distribute vital food assistance for Syrian refugees in Lebanon and Jordan.

The El Niño phenomenon has triggered severe and protracted drought in Ethiopia and Somalia, where successive harvest failures have pushed people into hunger and where malnutrition rates have risen sharply. WFP is scaling-up its operations to support disaster risk reduction and resilience-building, in addition to addressing nutritional needs.

While facing the world’s biggest and most complex humanitarian crisis in Syria, despite enormous challenges in the last five years, WFP has provided a lifeline to people both inside the country and to some 1.5 million refugees outside Syria through food, vouchers and e-cards.

“WFP is very grateful for this generous contribution from the Government of China, which confirms China’s commitment to urgent humanitarian needs around the globe,” said Sixi Qu, WFP China Representative. “WFP is scaling-up its emergency food assistance to the most vulnerable people affected by disaster and conflict. WFP will continue to work closely with the Government of China to ensure the efficient and effective delivery of China’s contribution to needy people as quickly as possible. ”

“China is becoming an increasingly important global player and significant donor to WFP and we are ready to partner with China within our new MOU, supporting China’s domestic efforts to ensure food security and poverty alleviation, as well as enhancing South-South and trilateral cooperation through sharing relevant Chinese expertise and technical assistance,” Sixi said. 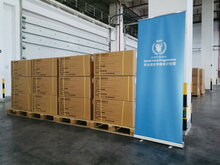 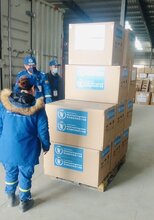