TEHRAN– The German Ambassador to the Islamic Republic of Iran visited Shahid Nasseri refugee settlement in Saveh on 8 February 2015 following a German contribution of more than US$1 million to provide food assistance and educational support for Afghan and Iraqi refugees living in settlements across the country.

WFP used the funds for the local purchase of some 1,000 metric tons of fortified wheat flour, 104 metric tons of sunflower oil enriched with vitamins and 125 metric tons of lentils. WFP provides 30,000 of the most vulnerable refugees with a monthly ration of basic food items including bread, rice, sugar, lentils and oil. In addition, around 3,000 refugee schoolgirls and their female teachers in 19 settlements across Iran receive a take-home ration of sunflower oil as an incentive to encourage girls’ education among the refugee community.

During the visit, Ambassador Michael Baron Von Ungern-Sternberg met government officials and handed a symbolic bag of wheat flour to a representative of the refugees.

“I am very pleased about the wise policy of Iran’s government to promote education amongst refugees, this is a great investment in the future of refugees and contributes to the regional stability, peace and development of Afghanistan,” said Von Ungern-Sternberg, during the hand-over ceremony at the refugee settlement.

WFP Representative in Iran Negar Gerami also expressed her appreciation for the German contribution. “These funds from the German government allow WFP to continue to assist the most vulnerable group of refugees living in Iran,” Gerami said.

For more information on the WFP’s work in Iran, visit our dedicated country page:
http://www.wfp.org/countries/iran 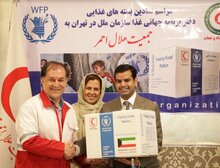