NEW DELHI – The Government of Kerala, supported by the United Nations World Food Programme (WFP), announced yesterday that it will begin a new pilot to improve transparency and efficiency in the delivery of food to 34 million people across the state.

The government-run Targeted Public Distribution System, will begin testing “point-of-sale” devices that allow for the biometric authentication of beneficiaries. This will make the delivery of food more efficient and cost effective by helping the government to reach the right beneficiaries says WFP, which helped support the design of the new system.

At the same time, new software, now under development by the state government, with technical support from WFP, will bring further benefits; it will help improve the supply chain, allow for real-time monitoring of food subsidy delivery and, eventually, allow for better decision-making with the aid of advanced data analytics. The new software will also create an on-line system for logging complaints.

“The partnership with WFP has the potential to transform TPDS in Kerala,” said Mr. Anoop Jacob, Minister for Food, Civil Supplies, Consumer Protection and Registration, Government of Kerala.  “The pilot will pave the way for remarkable change in our Targeted Public Distribution System to ensure effective implementation of the National Food Security Act.”

If the changes to the way food is delivered in Kerala are successful, they can be replicated in other parts of India. “We are enthusiastic about this new project,” said Dr. Hameed Nuru, WFP Country Director. “It will benefit millions of people, who critically depend on subsidised food. We hope that the experience of Kerala will guide other states in transforming the Targeted Public Distribution System to make it more efficient, convenient and transparent for all stakeholders.” 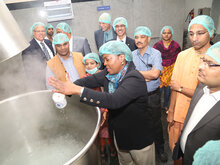