Kyrgyz Republic, Russia And WFP To Scale Up Collaboration To Promote Social Development

BISHKEK – The Kyrgyz Republic and the UN World Food Programme (WFP) announced today that social protection measures in the country will be amplified thanks to collaboration between WFP and the Government and with financial support from the Russian Federation.

WFP’s School Meals programme, which currently provides nutritious hot meals to 62,000 primary school students in 261 schools, is expanding to reach students in over 100 new schools in the country’s poorest rural areas thanks to a new contribution from the Russian Federation. Local authorities and the private sector are also supporting the initiative through additional contributions.

After directly benefiting over 100,000 vulnerable Kyrgyz people under the ‘Support to National Productive Safety Nets and Longer-term Community Resilience’ programme through piloting of public works to create and restore community assets in target areas, WFP and the Kyrgyz Government are expanding their effort to roll out a broader range of projects to support the poor and vulnerable.

These significant achievements were highlighted today during a press conference attended by the Minister of Labour and Social Development, Kudaibergen Bazarbaev, the Russian Ambassador, Andrey Krutko, and WFP Country Director, Ram Saravanamuttu.

“WFP and Kyrgyz Government joint programmes have proven to be effective in delivering sustainable results, particularly in poverty reduction and rural development,” said Minister Bazarbaev. “We will build on these achievements to scale up our efforts to promote social development in the country with the support of donors such as the Russian Federation.”
“These impressive achievements would not be possible without the financial support of the Russian Federation,” said WFP Kyrgyz Republic Country Director Ram Saravanamuttu. “We would like to thank the Russian Federation for its collaboration with WFP and the Kyrgyz Government to ensure that people are more food secure and are able to rely on more resilient and sustainable livelihoods.”

In the coming months, the Government of the Kyrgyz Republic and WFP will work together to design a new five-year comprehensive country programme to build on achievements and promote social development. The new programmes will allow for further improvements in school feeding and productive safety nets as part of a broader social protection platform.

“As an emerging international donor, Russia strives to ensure the most efficient use of its resources to support development. In the Kyrgyz Republic, WFP and the government have demonstrated the effectiveness in combining the knowledge, best practices and innovation to deliver concrete results,” remarked Ambassador of the Russian Federation Andrey Krutko.

Since the start of WFP operations in the Kyrgyz Republic in late 2008, the Russian Federation has contributed about US$50 million to support WFP’s activities aimed at improving food security, enhancing productive safety nets and optimizing school meals, making it the single largest donor to WFP in the Kyrgyz Republic. 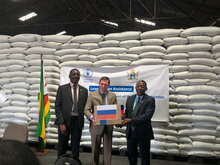