NAIROBI – After more than a year of ration cuts caused by a shortage of funds, new donor contributions have now allowed the United Nations World Food Programme (WFP) to resume providing full food rations to refugees in Kenya’s Dadaab and Kakuma camps starting on 1 April.

With new resources received since the beginning of the year, WFP is now able to restore the full food ration for all refugees from April to July. However, the funding currently available for cash transfers – which make up 30 percent of the refugees’ food assistance – will last only until May.

“We are pleased to announce that can resume full rations for the refugees thanks to new donor contributions,” said Annalisa Conte, WFP’s Country Director for Kenya. “However, we are urging our donors to continue making new resources available to enable us to carry on providing this much-needed food assistance for 420,000 people.”

Each month, WFP provides each refugee with a mix of food items – cereals, pulses, vegetable oil, and nutrient-enriched flour – and a cash transfer equivalent to a third of the minimum food requirement. The cash, sent through mobile telephones, allows refugees to buy food products of their choice from local markets.

WFP is the world's largest humanitarian agency fighting hunger worldwide, delivering food assistance in emergencies and working with communities to improve nutrition and build resilience. Each year, WFP assists some 80 million people in more than 80 countries. 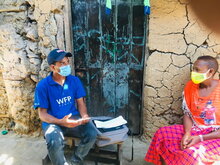