BAGHDAD – The United Nations World Food Programme (WFP) has been able to scale up food assistance to hundreds of thousands of Iraqis displaced from their homes in recent weeks thanks to a generous contribution of US$148.9 million from the Kingdom of Saudi Arabia.

The contribution has helped WFP provide desperately needed food to people who fled the conflict that began in Mosul in mid-June, including Christian and Muslim families and most recently Yazidis who escaped violence in Sinjar and sought refuge in Dahuk and other governorates in the Kurdistan Regional Government (KRG) area.

The contribution to WFP is part of a US$500 million donation from Saudi Arabia to UN agencies in July to provide urgently needed humanitarian assistance in Iraq.

“The food security situation in Iraq is alarming -- the worst that the country has witnessed since the sanctions in the early 1990s. The breakdown of the Public Distribution System for food in many parts of Iraq, the destruction and confiscation of agricultural produce, widespread insecurity and massive displacement of civilians have resulted in immense hardship and untold human suffering.  The majority of Iraqis are either trapped at home or have become displaced in precarious conditions,” said Mohamed Diab, Director of WFP’s Regional Bureau for the Middle East, North Africa, Central Asia and Eastern Europe.

Despite a challenging security situation and displaced people on the move since mid-June, WFP has distributed food to more than 524,000 people in 10 governorates across the country and has plans to scale up its operation to reach 1.2 million people by early 2015.

Saudi Arabia’s contribution has most recently assisted Yazidi families who fled violence and persecution in the Sinjar area. Since 4 August, WFP has set up eight emergency kitchens, mostly in Dahuk, and provided hot meals to more than 173,000 people who fled Sinjar.
“We are working to avert a humanitarian tragedy, thanks to the timely contribution of much needed financial support from the Kingdom of Saudi Arabia, which came with flexible terms. Without this donation, WFP would not have been able to respond so quickly to Iraq’s evolving humanitarian crisis. The Kingdom of Humanity’s extreme generosity has allowed WFP to save lives by rapidly scaling up its food assistance to Iraqis struggling to meet their basic needs in the face of a truly devastating humanitarian crisis,” Diab said.

Of the 524,000 people assisted by WFP since mid-June, more than 268,000 have received food parcels containing essential items such as rice and cooking oil. Each parcel feeds a family of five for one month. More than 83,000 people have received emergency ready-to-eat rations that include canned food. This is in addition to the more than 173,000 people who received hot meals from emergency kitchens in recent weeks.

“WFP is humbled by the goodwill of Saudi Arabia, the main donor for food given to displaced groups in Dahuk. The Kingdom’s contribution is making a significant difference in the lives of thousands of Iraqis of all faiths, both adults and children,” said Jane Pearce, Country Director for the WFP Office in Iraq.

Before the latest wave of displacement, WFP was already assisting about 240,00 people displaced by conflict in Iraq’s al-Anbar governorate, as well as more than 180,000 refugees from the conflict in Syria who are sheltering in Iraq. 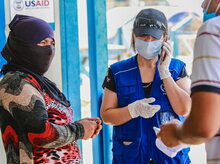 With continued support from the United States, WFP assists thousands of vulnerable families in Iraq