ADDIS ABABA – A major contribution of 140 million Swedish kronor (US$16 million) from the Government of Sweden is allowing the United Nations World Food Programme (WFP) to provide relief food assistance this month for more than 1.5 million people in the Somali region of Ethiopia.

The contribution from the Swedish International Development Agency, or Sida, is one of the first international responses to the crisis amidst rising food needs across the country and increased efforts to support the Government of Ethiopia in the response.

Intense drought caused a dramatic increase in the number of people in need of relief assistance – from 2.5 million people at the beginning of the year to 8.2 million in October – which in turn led to a serious funding gap for WFP in Ethiopia.  The agency was concerned that it would have to stop relief distributions entirely at the end of November. But Sweden’s generous and timely contribution is allowing the November distributions to go ahead as planned, providing a vital lifeline to drought-affected people in the Somali region.

“We know how important it is to act quickly and early to save lives in these types of crises. Paying early will mean saving later. Ethiopia finds itself in an extraordinarily dire situation with increasing numbers of people needing food assistance. We are happy that the joint and intensive collaboration between the Embassy, Sida HQ and WFP have now materialized in this contribution. One important key factor has been that the Africa Department in Sida HQ realized the need for flexibility and could reallocate development funds for humanitarian needs,” said Anneka Knutsson, Head of Development Cooperation and Deputy Head of the Embassy of Sweden.

More than 1.5 million people in the Somali region will receive cereals, pulses and vegetable oil, helping to stabilize malnutrition rates, which have risen sharply in recent months since the drought took hold.  The Somali region was among the first to face the impact of this crisis, starting with the failure of the short rains, which dried out pasture earlier this year, affecting livestock and pastoral livelihoods in particular.

“Sweden is among the very first to step forward and respond to the current crisis. Families across the Somali region, whose lives have been turned upside down by what is said to be one of the worst El Niño events in recorded history, will feed themselves and their children for the next month thanks to the generosity of Sweden,” said John Aylieff, WFP Representative and Country Director in Ethiopia.

Sweden’s contribution will complement government distributions in other regions following the Government of Ethiopia’s allocation of 4 billion birr (US$192 million) to relief efforts. Humanitarian needs still remain extremely high in the first six months of 2016, and WFP, together with the Government of Ethiopia, is gearing up to provide assistance to more than six million people.

About Sida:
The Swedish International Development Cooperation Agency, SIDA, is a government agency working on behalf of the Swedish parliament and government, with the mission to reduce poverty in the world.

About WFP:
WFP is the world's largest humanitarian agency fighting hunger worldwide, delivering food assistance in emergencies and working with communities to improve nutrition and build resilience. Each year, WFP assists some 80 million people in around 80 countries.

WFP, UNHCR, RRS appeal for funding to continue feeding over 750,000 refugees in Ethiopia 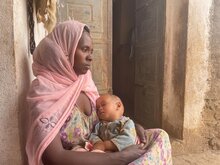