ROME/GENEVA - Executive Director of the United Nations World Food Programme Ertharin Cousin and UN High Commissioner for Refugees António Guterres will be in Rome tomorrow, 4 June 2014, in a joint push to draw attention to the plight of refugees and third-country nationals fleeing Central African Republic (C.A.R).

The heads of the two agencies are expected to tell a special side event to WFP’s Executive Board meeting that urgently increased international support is needed to accelerate humanitarian efforts in the region.

Countries neighbouring C.A.R. are struggling to cope with more than 226,000 refugees and third-country nationals who have fled violence since December, many of whom are arriving malnourished after months of living in the bush. Cameroon, for example, where almost 90,000 people have arrived since December, is seeing acute malnutrition rates among refugees running at 20-30 percent, and higher still in some locations.

Currently, the existing Regional Refugee Response Plan for Central African Republic is only 9 percent funded. This plan involves UNHCR and 14 partners in the four countries affected by C.A.R. refugee crisis – Cameroon, Chad, the Democratic Republic of the Congo and the Republic of the Congo. 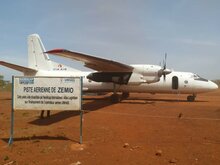