As tens of thousands of South Sudanese continue to flee their conflict-torn homeland, the heads of the United Nations Refugee Agency (UNHCR) and the UN World Food Programme (WFP) travelled to Ethiopia's border region of Gambella from neighboring South Sudan to meet refugees who recently fled the conflict.

ADDIS ABABA, 2 April 2014 - The refugees, mostly women and children, reported walking up to three weeks before reaching the border. Many described surviving on grass, wild fruits and leaves. They were visibly exhausted, traumatized and famished, and scores of young children are registering an alarmingly high malnutrition rates.

During their visit to Gambella, the UN High Commissioner for Refugees António Guterres and WFP's Executive Director Ertharin Cousin, together with humanitarian partners and Ethiopian officials, visited the newly-built Kule Camp which houses over 23,000 South Sudanese refugees and the Pagak border entry point, where hundreds of people cross daily from South Sudan.

“The physical and psychological condition of these people is shocking. This is a tragedy I had hoped I would not see again,” Guterres said. “Many of these people are becoming refugees for the second time.”

Altogether, over 88,000 South Sudanese have sought refuge in Ethiopia since the conflict erupted in mid-December 2013. The two agency chiefs expressed concern that the numbers could climb sharply in the coming months if the conflict does not come to an end, and worry that lack of funds could thwart an adequate humanitarian response.

"Today we witnessed a mother arrive in Ethiopia where help was available, only to lose her youngest child, who was too weakened by their journey. This is a political crisis that is now evolving into a humanitarian catastrophe,” Cousin said. "We must work together and redouble our efforts to ensure that people receive nutritious food, clean water and other basic services on both sides of the border, so that not another mother cries like she did today because she loses her child."

WFP delivers high energy biscuits and other food (sorghum or wheat, pulses, vegetable oil, sugar and salt) at the border points and in camps, along with fortified nutritional supplements to those malnourished, particularly children under five years old, pregnant women and nursing mothers.

UNHCR and the Government of Ethiopia, through its refugee agency, ARRA, coordinate the response with humanitarian partners. UNHCR is providing medical assistance, shelter in the new camps – Lietchuor and Kule – as well as water and sanitation, core relief items and other protection services to the arriving refugees at the major points of entry. UNHCR has prioritized vulnerable groups, in particular children with severe acute malnutrition and their families for relocation to the new camps. In addition, UNHCR and ARRA continue registration of arriving individuals.

The two UN chiefs arrived in Ethiopia following a two-day visit to South Sudan, where they met displaced people, humanitarian partners and discussed the crisis with President Salva Kiir and other government officials.

“Peace is an absolute must,” Guterres said. “The international community must come together to do everything possible to press the parties to reach a political solution and forge peace. If there is no peace soon, I fear there could be a true humanitarian calamity.”

Last week, WFP launched a major cross-border operation from Ethiopia, to deliver roughly 15,000 metric tons of food by air, river boat and truck to several hundred thousand South Sudanese and Sudanese refugees living in remote and inaccessible parts of South Sudan. Cousin expressed her appreciation to the Ethiopian government for authorizing this corridor noting truck delivery is also significantly less expensive than the airdrops WFP is also having to deploy.

Nearly 255,000 South Sudanese have sought refuge in the neighboring countries of Uganda, Kenya and Sudan, as well as Ethiopia. The massive influx is straining the humanitarian response.

UNHCR has deployed a Mi-8 transport helicopter, with room for 20 passengers and a cargo capacity of four metric tons, to the Gambella operation to assist refugees arriving at the Akobo entry point, a hard-to-reach location.

UNHCR is leading an inter-agency regional appeal for more than US$ 370 million to fund the refugee response in Ethiopia, Kenya, Republic of Sudan and Uganda.

UNHCR leads and co-ordinates international action to protect refugees and safeguard their rights and work for their well-being. 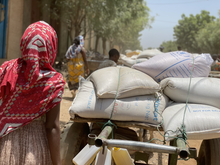