WFP is providing food or cash for approximately 190,000 people in urgent need of assistance. A WFP-led Rapid Drought Assessment estimates that as many as 770,000 people have been affected by the drought, which has resulted in the loss of about one third of the paddy harvest in parts of the country.

"WFP is always determined to assist people affected by climate shock in Sri Lanka and after responding to the short-term needs of those affected by drought, WFP will redouble its efforts to support the affected people to rebuild resilience through food for work programmes“, said Ismail Omer, WFP Representative in Sri Lanka.

WFP’s assistance includes more than US$2.3 million dollars’ worth of food, such as rice, beans and vegetable oil, as well as US$277,500 in cash for affected families to buy their own food. The rice supplies for the operation have been partly provided by the Government of Sri Lanka, while a cash donation from the Government of Canada is covering additional costs. The operation is also funded by the UN Central Emergency Response Fund.

With the help of the Ministries of Finance and Economic Planning, Economic Development and Disaster Management, Government Agents and Divisional Secretariat, WFP has delivered food to distribution centres in the ten affected districts. Several international charities, including Save the Children, World Vision, ChildFund and OXFAM are working with WFP to distribute the food and cash in five of the targeted districts.

After responding to the short-term needs of those affected by the drought, WFP will work to help communities increase their resilience against future shocks through food-for-work programmes. These programmes will focus on rebuilding the lives of those who have lost their harvests and livelihood assets.

WFP will continue working with the Government and other partners towards its longer-term goals of mitigating the effects of climate change and recurrent drought in the country. These will include cash- or food-for-work projects such as rainwater harvesting and de-silting small water reservoirs, as well as tree planting to prevent soil erosion and land degradation. 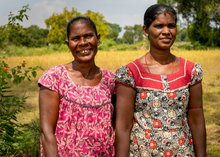