ADDIS ABABA – The United Nations World Food Programme (WFP) has announced that local farmers cooperatives in Ethiopia have begun delivering the largest amount of maize they have ever sold to WFP, enough to support more than 1.8 million people for a month.

Before the planting season last year, WFP signed forward contracts with 16 cooperative unions in Ethiopia for purchase of more than 28,000 metric tons of maize.  The first deliveries on those contracts began arriving at WFP warehouses last week. The maize will be used for WFP relief distributions in Ethiopia.

“Our goal here is to support Ethiopia feeding itself,” said WFP Country Director Abdou Dieng. “Buying food for our Ethiopia operation right here in Ethiopia makes sense in cost-effectiveness, and in providing a boost for the local economy by helping small farmers to get closer to markets.”

This is being done under WFP’s Purchase for Progress initiative (P4P), which is financed by the Bill and Melinda Gates Foundation and implemented in collaboration with the government of Ethiopia through the Agricultural Transformation Agency (ATA).

The forward delivery contracts signed with the cooperatives are one approach the P4P pilot initiative is testing to promote small farmers’ access to markets. To support the cooperatives in fulfilling their contracts, WFP provides technical assistance to farmers associations for storage and post-harvest handling and logistical support. Through agreements with local banks, several agricultural cooperatives were able to use their WFP contracts as collateral for loans to buy new equipment and aggregate more maize from their members.

In 2012, WFP purchased more than 112,000 metric tons of food in Ethiopia, more than any other country on the continent.

About 90 percent of this food has been used directly for WFP operations within Ethiopia. For example, more than 37 schools taking part in the WFP school meal programme in Ethiopia receive food harvested nearby.

WFP’s purchases from Ethiopia in 2012 included more than 23,000 tons of locally produced Super Cereal, a nutritious blend of enriched corn and soy flour that WFP uses to prevent and treat nutritional deficiencies among young children, pregnant woman and nursing mothers. 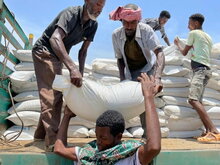 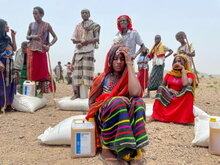