ERBIL – The United Nations World Food Programme (WFP) is concerned about about the humanitarian conditions inside western Mosul’s old city, where as many as 180,000 people are reportedly hungry and living in miserable conditions.

“The situation in western Mosul has deteriorated substantially and families are arriving at camps and mustering points terrified, tired and hungry from the journey under the blistering summer heat,” said WFP Iraq Representative and Country Director Sally Haydock. “WFP has prepositioned packages of ready-to-eat food along all escape routes.”

To support the nutritional needs of newly displaced children and prevent a rise in malnutrition, WFP has started to provide a two-month supply of a specialized peanut-based supplement to treat and prevent malnutrition in children between six months and five years of age.

While access to reliable information about the conditions inside western Mosul is limited, WFP’s monitoring team and partners have spoken to a number of newly displaced families to assess access and availability of food. Many distressed people said that very little food is available in markets and that they were surviving on just one meal a day.

“In extreme cases, people cannot access food at all. We appeal to all parties to the conflict to facilitate immediate and unimpeded humanitarian access to all Iraqis in need of assistance,” Haydock added.

Since the start of the initial Mosul offensive in October 2016, WFP has reached more than 1.6 million people with ready-to-eat food covering their immediate needs and, once they have settled into camps, monthly food rations they can cook for themselves. 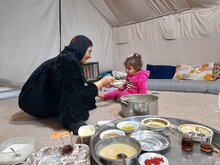