BAGHDAD – The United Nations World Food Programme (WFP) has distributed desperately needed food for more than 30,000 people in and around the northern Iraqi town of Qayyarah, 60 kilometres south of Mosul. The town was under siege and inaccessible for over two years.

These rations will provide enough food for more than 30,000 people for a full month. WFP also distributed food to almost 2,000 displaced people living in camps and with host families in areas surrounding Qayyarah.

“The people of Qayyarah had been living under siege for two years and are suffering extreme hunger with scarce access to food supplies. Reaching them with life-saving food assistance is a very positive step forward,” said Sally Haydock, WFP Iraq Country Director. “Thanks to a generous contribution from the Government of Germany, WFP is able to provide more food assistance to families who are being displaced from the greater Mosul area.”

Last week, WFP and its humanitarian partners assessed the humanitarian situation in Qayyarah and found that all of the people remaining in the town are in urgent need of food and other forms of humanitarian assistance. All of its shops were either destroyed or closed and food stocks were running dangerously low, with people surviving only on wheat from the recent harvest.

Over the last two years people from the Qayyarah area fled to camps in Erbil, Kirkuk and Salah al-Din, where they receive regular food assistance through WFP’s partners. More than 3 million Iraqis have been displaced by conflict in Iraq since mid-June 2014. In response, WFP has provided food assistance to more than 1 million vulnerable displaced Iraqis across all 18 governorates.

WFP is entirely voluntarily funded and relies on support from governments, companies and individuals to provide food assistance to internally displaced Iraqis. WFP is scaling up its food assistance in Iraq to support newly displaced families from the Mosul area, thanks to a contribution from Germany of US$27.9 million. To continue to assist displaced families in Iraq until the end of the year, WFP urgently requires US$106 million.

PepsiCo partners with the UN World Food Programme in Iraq to support farmers affected by conflict, displacement, and climate change 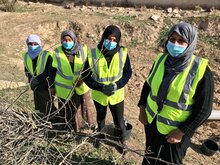