Rome – The three United Nations’ Rome-based agencies dedicated to food and agriculture called today for bolder action to achieve gender equality and empower women and girls in the agricultural sector and beyond.
Gender
25 April 2019

KABUL – A ceremony was held here today in recognition of a US$16 million (₩18.3 billion; AFN1.24 billion) contribution from the Republic of Korea to the UN World Food Programme (WFP) in Afghanistan. It was attended by representatives from the Republic of Korea, the Afghanistan Ministry of Agriculture, Irrigation and Livestock, the Ministry of Rural Rehabilitation and Development and WFP.

ROME – A group of prominent women joined the three Rome-based United Nations agencies today, to mark International Women’s Day at an event recognising women’s contributions to building smart solutions for those who are excluded from decision making and influencing development in all sectors.
Rome-based agencies Gender
5 December 2018

Nutrition and women's empowerment - a foundation for development in Sri Lanka

Inequality exacerbates hunger, malnutrition and obesity in Latin America and the Caribbean

Obesity grows by 3.6 million people every year in the region, while hunger has increased in three countries since 2014, according to a new report from FAO, PAHO, UNICEF and WFP.
Food Security Gender
18 September 2018 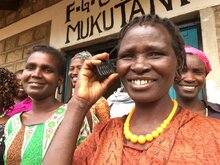 ROME – Recognizing the multiplying effects of investing in rural women, Sweden – through its development cooperation agency Sida – announced a US$5 million commitment to the Joint Programme on Accelerating Progress towards the Economic Empowerment of Rural Women (JP RWEE).
Gender
20 September 2016

BISHKEK – The United Nations World Food Programme (WFP) and the Embassy of Japan today participated in a ceremony to provide equipment to support food-processing businesses and rural women’s entrepreneurship across seven rural communities in the Kyrgyz Republic.
Gender Kyrgyzstan
17 September 2015

Only 1 in 4 internally displaced infants is exclusively breastfed in Ukraine. UNICEF and WFP call to protect and promote breastfeeding among conflict-affected mothers in eastern Ukraine

KYIV, 5 August 2015 – Only 1 in 4 internally displaced infants under the age of six months is exclusively breastfed in Ukraine. UNICEF and WFP today called on those involved in the emergency response in eastern Ukraine to stop distribution of infant formula and promote breastfeeding to avoid unnecessary illness and deaths of children.
Emergencies Gender Ukraine
17 March 2015

Bishkek, 17 March 2015 - The United Nations World Food Programme (WFP) has welcomed a US$490,000 contribution from the Government of Japan to support women-led businesses and smallholder women farmers in the Kyrgyz Republic.
Gender Kyrgyzstan
2 July 2014

United Nations And Norway To Support Girls’ Education In Malawi

DEDZA, MALAWI– A new initiative to ensure better education for girls in Malawi is today being launched by Norwegian Prime Minister Erna Solberg in Dedza. Improving Access and Quality of Education for Girls in Malawi is a three-year, MK 7.2 billion programme that provides a range of interventions to address key threats to girls’ education: poor food and nutrition, inadequate protection, poor-quality schooling and violations of girls’ sexual and reproductive rights.
Gender School feeding Malawi
25 June 2014

Quito – Mario and Patricio Pillajo’s book about plants of the Andes titled “Plantas de la Cordillera Andina”, containing the description and traditional uses of two hundred species, was presented yesterday to the Pichincha Provincial Government. The book is a compilation of plants growing in the Cayambe and Pedro Moncayo cantons in the province of Pichincha, and the canton of Papallacta in the Napo province. Their work was published with the support of the Pichincha Provincial Government and the World Food Programme (WFP).
Resilience Climate Food Security Gender Nutrition Ecuador
24 June 2014

Japan Contributes US$1.6 Million To Support WFP Operations In Guinea

“Giving women the power to make choices over their lives is one of the first steps towards a world with zero hunger,” said WFP Executive Director Ertharin Cousin. “In every country where WFP works, women are front and centre in programmes to tackle the problems of food insecurity and undernutrition. We work with women farmers, traders, nutrition workers, school cooks and we serve millions of schoolgirls, pregnant women and nursing mothers.”

This year’s United Nations theme for International Women’s Day stresses that “Equality for women is progress for all.” One example of a WFP programme that focusses on women’s advancement is Purchase for Progress, or P4P, an initiative that helps smallholder farmers, particularly women, become competitive players in the marketplace by producing food for sale and use in WFP programmes.

In Tanzania, P4P works with 28 farmer organisations who reach out to some 20,000 farmers, 43 percent of whom are women.

“Before P4P, I was living in a mud house, but now I have an improved house,” says Magreth Mgeni (46). “I’m now taking my children to school without any problem. Today my neighbours are learning from me, understanding how the market works and doing as I do.” When she joined P4P in 2009, Magreth was cultivating just two acres of land. She now cultivates nine acres and, in 2013, she sold 4,000 kg of maize through her local cooperative.

“Women play a transformative role in their families,” says WFP Country Director Richard Ragan. “Empowering women is a key element across our programmes in Tanzania. Women are trained to enhance their skills in agriculture, and in the maternal and child health programmes women are provided with supplementary food and nutrition education to help prevent future stunting. Also, WFP’s school feeding programme helps girls stay in school, building the bodies and minds of the next generation.”

A report by WFP’s sister agency the Food and Agriculture Organization estimated that closing the gender gap in agriculture by giving women farmers more resources could bring the number of hungry people in the world down by more than an estimated 100 million people. The State of Food and Agriculture 2010-2011 report found that women lacked access to land, credit, tools and seeds that could boost agricultural production. 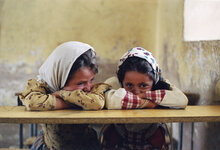 Ecuador: ECHO Assists in Improving the Diets in the Northern Border

QUITO.– Colombian asylum seekers crossing the Ecuadorian border face difficult conditions: Most have nothing left but the clothes they are wearing. To meet their basic needs and promote their integration in Ecuadorian communities, the World Food Programme (WFP) carries out a humanitarian operation that provides the most vulnerable with food and protection assistance.
Supply Chain Nutrition Resilience Gender Cash transfers Food Security Ecuador
19 November 2013 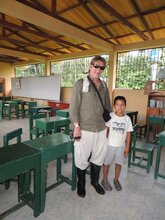 Italy, Sucumbios and WFP Work for the Children in Ecuador’s Northern Border

Ecuador receives the largest flow of refugees in the Western Hemisphere. Many Colombian families who flee from violence in their country make a home for themselves in the area closest to the northern border. They receive assistance from the World Food Programme (WFP), as do their Ecuadorians neighbours.
Supply Chain Nutrition Resilience School feeding Gender Food Security Ecuador
Search