Rainfall anomalies during the 2017 year and an ongoing economic crisis have negatively impacted the livelihoods of rural households in Chad, including agriculture, livestock, and nonfarm income activities. This has driven a deterioration in food and nutrition security across the majority of Chad’s Sahelian belt. In some regions, the rainy season was characterized by prolonged dry spells and an early end, which resulted in a 2.1% decrease in national cereal production compared to the five-year average and 5.1% reduction compared to last year’s levels. The largest production declines were recorded in several regions of the Sahel, notably Wadi Fira (-39%), Kanem (-27.7%), Bahr El Ghazal (-20.5%) and Batha ( -9.4%). Fodder deficits and the rapid drying of semi-permanent waterpoints also caused early transhumant movement of livestock from Sahelian regions to the Sudanian zone. As a result, the agricultural and pastoral lean seasons started early this year. Given this situation and taking into account the recommendations of the CASAGC Technical Committee to monitor the evolution of the food, nutrition and pastoral situation, the Food Security and Early Warning Information System (SISAAP), ministerial departments providing information (SPI), and technical partners involved in food and nutrition security monitoring (WFP, FAO, and FEWS NET) conducted this joint
assessment. Its main objective was to assess the magnitude and severity of the current food and nutrition security situation in order to propose appropriate responses. Data collection was conducted at three levels (individual, household and community) with anthropometric measurements (MUAC and oedema) of children aged 6-59 months. The survey was conducted in 10–18 May 2018 on a sample of 4,574 households in 24 departments. 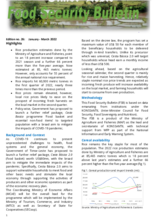 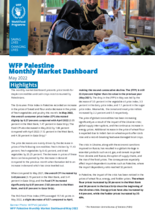 WFP and IOM - Understanding the adverse drivers and implications of migration from El Salvador, Guatemala and Honduras, 2022 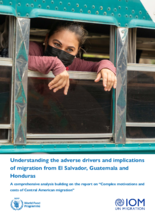