Reports Emergencies Emergency Preparedness and Response
WFP and FAO are issuing an early warning alert for urgent humanitarian action in 20 hunger hotspots where hunger is expected to worsen from June to September 2022.

According to the May 2022 Hunger Hotspots report, Ethiopia, Nigeria, South Sudan, and Yemen remain at ‘highest alert’ as hotspots with catastrophic conditions, and Afghanistan and Somalia are new entries to this worrisome class since the previous hotspots report in January 2022. These countries all have segments of the population facing IPC phase 5 ‘Catastrophe’ – or at risk of deterioration towards catastrophic conditions, with a total of 750,000 people already facing starvation and death in Ethiopia, Yemen, South Sudan, Somalia and Afghanistan.

The conflict in Ukraine is compounding what is already a year of catastrophic hunger, unleashing a wave of collateral hunger that is spreading across the globe, transforming a series of terrible hunger crises into a global food crisis the world cannot afford.

The Democratic Republic of the Congo, Haiti, the Sahel region, the Sudan, and Syria remain ‘countries of very high concern’ with deteriorating critical conditions, as in the previous edition of this report – with Kenya a new entry to the list.

The report finds that – alongside conflict - climate shocks will continue to drive acute hunger in the outlook period from June to September 2022 and we have entered a ‘new normal’ where frequent and recurring droughts, flooding, hurricanes and cyclones decimate farming, drive displacement and push millions to the brink in countries across the world.

Sri Lanka, West African coastal countries (Benin, Cabo Verde, and Guinea), Ukraine and Zimbabwe have been added to the list of hotspots countries, joining Angola, Lebanon, Madagascar, and Mozambique which continue to be hunger hotspots. 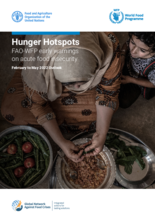 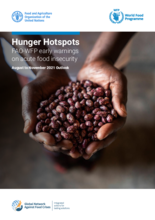