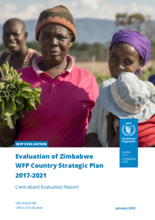 The evaluation was commissioned by the independent Office of Evaluation to provide evaluative evidence for accountability and learning to inform the design of the next WFP CSP in Zimbabwe. It covers WFP activities implemented between 2015 and 2020 to assess continuity from the previous programme cycle, the extent to which the CSP introduced strategic shifts and implications for such shifts for performance and results.
Independent evaluation Climate action Emergencies Migration Food Assistance for Assets Nutrition HIV and tuberculosis Zimbabwe
21 September 2021

Strategic Evaluation of Nutrition and HIV/AIDS

The terms of reference aim to inform stakeholders about the evaluation, clarify expectations and requirements and guide the evaluation team in its work during the various phases of the evaluation
Gender equality Nutrition HIV and tuberculosis 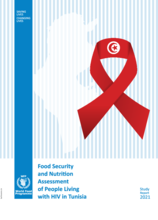 A presentation of four provincial briefs describing the updated Nutrition and HIV-related activities carried out in Mozambique by WFP.
Nutrition HIV and tuberculosis Mozambique 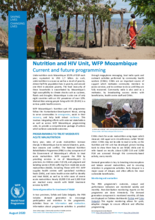 Undernutrition costs Mozambique 10.9% of GDP each year, equivalent to USD 1.7 billion. As such, undernutrition is a cause as well as a result of poverty. Almost half the population lives in poverty, and around one-third in absolute poverty. The food insecurity of these households is exacerbated by Mozambique's high susceptibility to climate shocks such as cyclones, floods and droughts. Mozambique is also one of only eight countries with an HIV prevalence of over 10%. Malnutrition among people living with HIV (PLHIV) is a serious public health concern. WFP Mozambique’s Nutrition and HIV programmes follow the Humanitarian-Development Nexus, aiming to serve communities in emergencies, assist in their recovery, and help build robust resilience. To learn more, please refer to the WFP Mozambique Nutrition and HIV Unit – Current and future programming document.
Nutrition HIV and tuberculosis Mozambique 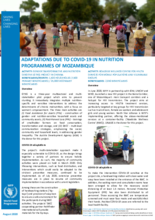 COVID-19: Adaptations to nutrition and HIV programmes in Mozambique

How do you reach beneficiaries with food and services in the midst of a global pandemic? This brief describes how WFP Mozambique has adapted its nutrition and HIV programmes to stop the spread of COVID-19.
Nutrition HIV and tuberculosis Mozambique 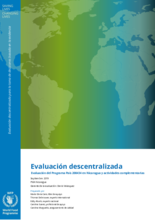 This decentralized evaluation (DE) was commissioned by the WFP Nicaragua Country Office and covers the Country Programme 200434, the T-ICSP and complementarity activities, as such covering the 2013-2018 period. The DE was carried out in the first semester of 2019.
Country Capacity Strengthening Disaster risk reduction Nutrition HIV and tuberculosis Nicaragua The decentralized evaluation has been commissioned by WFP Ethiopia Country Office and covers the USAID/PEPFAR funded ‘Urban HIV/AIDS, Nutrition and Food Security Project in Ethiopia 2011-2017’.
Nutrition HIV and tuberculosis Ethiopia 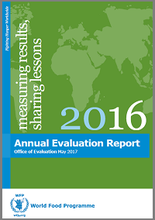 The mid-term evaluation covers WFP's Nicaragua Country Programme (CP) 200434 (2013-2018). It was intended for both accountability and learning and focuses on assessing: i) the appropriateness and coherence of the operation; ii) its results; and iii) the factors explaining the results.
Country Capacity Strengthening Food Assistance for Assets Nutrition HIV and tuberculosis School feeding Purchase for Progress Nicaragua Myanmar PRRO 200299 "Supporting Transition by Reducing Food Insecurity and Undernutrition among the Most Vulnerable": An Operation Evaluation

The evaluation covers the Myanmar Protracted Relief and Recovery Operation 200299 "Supporting Transition by Reducing Food Insecurity and Undernutrition among the Most Vulnerable". It was intended for both accountability and learning and focuses on assessing: i) the appropriateness and coherence of the operation; ii) its results; and iii) the factors explaining the results.
Country Capacity Strengthening Food Assistance Food Assistance for Assets Gender equality Nutrition HIV and tuberculosis Myanmar
Search