Bringing heavy rains, violent winds and storm surges, Intense Tropical Cyclone Batsirai made landfall on the central-eastern coast of Madagascar on Saturday. Storms during the agricultural season (that runs from October-April) have the potential to wipe out harvest, send food prices soaring and increase food insecurity.
Climate Natural disasters Food Security Madagascar Video for the Media Battered by multiple crises in recent years, Haitians who survived the recent 7.2 magnitude earthquake are now dealing with crumbled homes, lost livelihoods and limited or no access to food
Earthquakes Natural disasters Food Security Haiti Video for the Media Hunger in El Salvador, Guatemala, Honduras and Nicaragua has increased almost fourfold over the past two years - from 2.2 million people in 2018 to close to 8 million people in 2021 – a result of the economic crisis caused by COVID-19 and years of extreme climate events. Of this figure, 1.7 million people are in the ‘Emergency’ category of food insecurity and require urgent food assistance. Millions of people in Central America urgently need food assistance in the wake of Hurricane Eta, one of the worst storms in decades, as fears grow of another storm brewing in the coming days.
Heavy rains, high winds, deadly landslides and floods unleashed by Eta after making landfall in Nicaragua earlier this month killed dozens of people, destroyed infrastructure and hurt rural livelihoods along its path in Central America, including in Belize, Guatemala and Honduras
WFP predicts the number of people with severe food insecurity in the Dry Corridor could increase from more than 1.6 million in 2019 to close to 3 million in 2020, due to the socioeconomic fallout of COVID-19.
Climate Floods Food Security Natural disasters Italy Nicaragua Video for the Media

The United Nations World Food Programme today announced a massive rise in the number of hungry people it plans to assist around the world, as the devastating socio-economic impacts of the COVID-19 pandemic push millions more people into food insecurity in low- and middle-income countries.
To tackle the rising tide of hunger, WFP is undertaking the biggest humanitarian response in its history, ramping up the number of people it assists to up to 138 million from a record 97 million in 2019. But sustained funding is urgently required to respond to the immediate consequences of the pandemic on the most vulnerable, and support governments and partners as they curb the spread of the disease and deal with the fallout from the pandemic. WFP is appealing for a US$ 4.9 billion over the next six months for its life-saving work in 83 countries.
As well as delivering life-saving assistance on the front-lines of hunger, WFP is uniquely positioned to help governments assist and empower vulnerable communities through support to social protection systems, access to basic school-based and nutrition services, and support to food systems. A wave of desert locusts in East Africa is now forming more swarms in parts of Kenya, Ethiopia and Somalia, putting at risk the main crop harvest in May and June, and threatening the food security of smallholder farmers.
In South Sudan, desert locusts have affected four counties in Eastern Equatoria region since arriving in mid-February.
The March-April start of the long rains, coinciding with regeneration of rangeland and planting, enables the new wave of locusts to breed and spread.
It will be vastly more cost-effective to support the prevention and control efforts of Governments and the Food and Agriculture Organization of the United Nations (FAO) to tackle locusts now than to help people after their crops had been ruined.
Food Security Logistics and delivery networks Natural disasters South Sudan Video for the Media The World Food Programme is lending its emergency expertise to support response efforts underway in the Bahamas, which is reeling from the impact of Hurricane Dorian, the islands’ worst-ever hurricane.
WFP has distributed over 1,500 ready to eat meals, with food also reaching people affected in the hard-to-reach Little Abaco.
The assessment teams continue to reach isolated areas. While some areas of Grand Bahama and Abaco islands are now accessible, reaching other affected areas continues to be a major constrain.
Climate Food Security Logistics and delivery networks Natural disasters Bahamas Video for the Media For the fifth consecutive year, erratic weather patterns –prolonged dry spells and excessive rains—have decimated maize and bean crops in the Dry Corridor of Central America. This has affected the food security of subsistence farmers meaning that many struggle on a daily basis to feed their families.
WFP needs US$72 million to assist these people with food distributions in the short-term, and with capacity strengthening interventions in the medium- and long-term to help them build resilience, adapt to climate change and enhance national social protection systems.
Climate Natural disasters Smallholder Farmers El Salvador Guatemala Panama Video for the Media 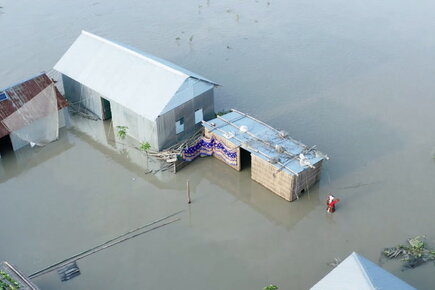 DHAKA – The World Food Programme is working together with the Government of Bangladesh to assist more than 275,000 people affected by flooding in the north-west of the country, activating for the first time an innovative forecast-based financing project.
The Bangladesh Ministry of Disaster Management and Relief reports that 2.3 million people have been affected in 20 of Bangladesh’s 64 districts.
WFP is closely monitoring the floods in coordination with the Government and we stand ready to assist further, should the situation deteriorate. Mozambique was affected by several consecutive natural shocks in the first months of 2019 that affected people’s food and nutrition security. In January, Tropical Storm Desmond caused excessive rains and floods in Sofala, Tete and Zambézia; in March, Cyclone Idai affected the center of the country; in April Cyclone Kenneth that affected Cabo Delgado; irregular rainfall patterns and pest attack on cereal crops; violence and insurgency in Cabo Delgado.
From July 2019 to March 2020, during the recovery and reconstruction period, WFP will provide food assistance for a total of 1,200,000 people per month, with 800,000 people in the central districts, 150,000 people in the northern districts and 250,000 in the districts in the southern zone affected by drought.
Climate Emergencies Floods Food Security Logistics and delivery networks Natural disasters Mozambique Video for the Media 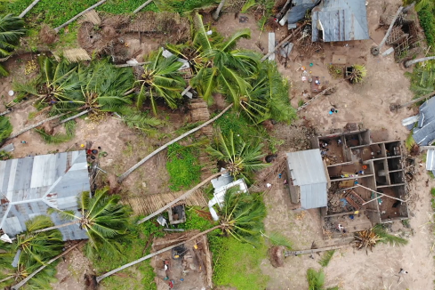 The World Food Programme has begun distributing assistance to communities affected by Cyclone Kenneth, which struck north-eastern Mozambique’s Cabo Delgado province on Thursday, 25 April – the strongest tropical storm ever to hit the country – causing widespread destruction and displacement.
To date, WFP has provided food assistance to around 1.3 million people struggling to get back on their feet after the devastation wrought by Cyclone Idai less than six weeks ago. Although floodwaters have receded in most areas it affected, access is still a challenge as infrastructure was severely compromised. This second cyclone is an additional blow for the people of Mozambique and bound to complicate the humanitarian response.
Emergencies Floods Food Security Logistics and delivery networks Natural disasters Mozambique Video for the Media 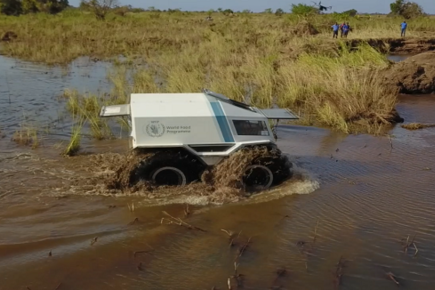 WFP is using amphibious vehicles known as Sherps. They are used to deliver food to isolated communities carrying 1 MT each– enough to feed 133 people for 2 weeks- up to 40km per hour overland and can paddle in water. We intend to assist 1.7 million of the 1.8 million Mozambicans in need of emergency food assistance. 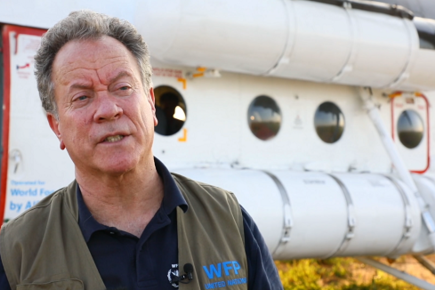 At the end of a two-day visit to Mozambique, the Executive Director of the United Nations World Food Programme, David Beasley, today said the international community must step up support to victims of the recent cyclone and flooding that have devastated large areas of the country.

WFP high-energy biscuits and water have been airdropped to isolated pockets of people stranded by the floodwaters in flooded areas in Buzi and Chimoio. Distributions of easy-to-prepare fortified food are underway in Beira, Dondo and other flood-affected areas in Sofala and Tete provinces.
Logistics and delivery networks Natural disasters Food Security Emergencies Floods Mozambique Video for the Media 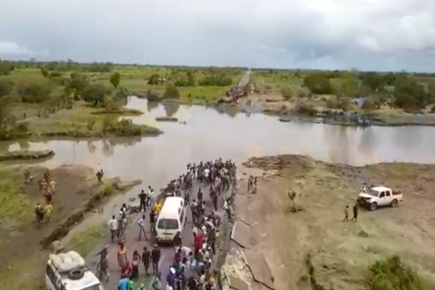 The World Food Programme is rushing food and other assistance to victims of the flooding and cyclone that hit Mozambique, Malawi and Zimbabwe. We have reached 20,000 people already and we are stepping up operations to assist, initially, 600,000 people.
Logistics and delivery networks Natural disasters Food Security Emergencies Floods Mozambique Video for the Media 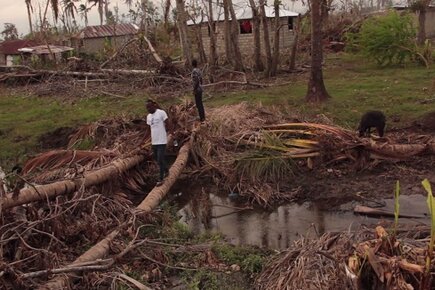 Some 1,4 Million Haitians Require Food Assistance in the Wake of Hurricane Matthew (For the Media) PORT VILA – The United Nations World Food Programme is supporting the Government of Vanuatu’s food distributions in priority areas to feed survivors of Tropical Cyclone Pam in Vanuatu. The government aims to provide assistance to all 162,000 people estimated affected by the storm. WFP is supplementing government food packages with rice and biscuits fortified with vitamins and minerals over the coming weeks. Further ahead, WFP expects to provide assistance for several months for those who were most severely affected by the storm.
Supply Chain Natural disasters Climate Emergencies Video for the Media 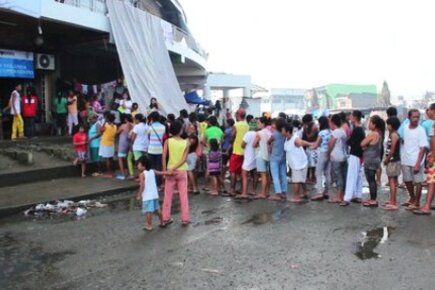 Philippines Operations (For The Media) 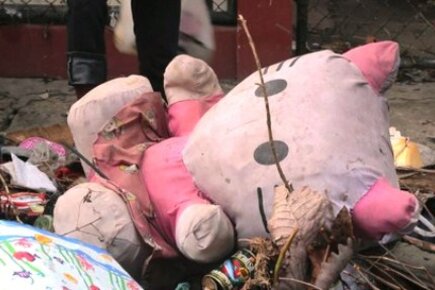 Since 13 November, family food packs with rice for more than 760,000 people, plus High Energy Biscuits for 33,000 people have been dispatched to shelters in 24 municipalities  on Leyte Island, as well as in Tacloban City, where Cousin also met with government officials.
Supply Chain Natural disasters Nutrition Climate Food Security Emergencies Floods Philippines Video for the Media

WFP Relief To Typhoon Haiyan Survivors (For The Media)

WFP and the Department of Social Welfare and Development distributed High Energy Biscuits (HEBs) to 5,000 people at Tacloban airport on Thursday. Deliveries to other communities including Guiuan, Eastern Samar, and other parts of Leyte are due to start today.
Supply Chain Natural disasters Food Security Emergencies Floods Philippines Video for the Media WFP On The Ground In The Philippines (For The Media)

During a ceremony at IFAD headquarters in Rome, teams from WFP, FAO and IFAD received an award of excellence for their work together in Mozambique. By combining their efforts in the field, the three agencies were able to relieve hunger for families in the short-term while enabling them to provide for themselves down the line.
Natural disasters Rome-based agencies Mozambique Video stories
Search