Algeria has hosted refugees from Western Sahara since 1975 in is one of the world’s most protracted refugee crises. The Sahrawi refugees live in five camps near the town of Tindouf in Western Algeria, characterized by extreme heat and very low rainfall. The harsh and isolated desert environment limits livelihood and economic opportunities, leaving the refugees highly dependent on humanitarian assistance.

Despite over 30 years of uninterrupted assistance, 30 percent of Sahrawi refugees are food insecure and 58 percent are at risk of food insecurity. The last nutrition survey showed a deterioration of the nutrition situation of children and women.

Global acute malnutrition affects almost 8 percent of children aged 5 or less. The  prevalence of anaemia is alarmingly high with more than half of children aged 5 or less and women of reproductive age affected, possibly indicating a dietary iron deficiency. In addition, poorly diversified diets and a lack of nutritional awareness result in overlapping nutritional problems including mineral and vitamin deficiencies and overweight/obesity in women.

Despite continued negotiations, the political situation remains unsolved, so refugee camps have been the only alternative for Sahrawi refugees. The status quo has fueled frustration and disillusionment, especially among the young.

At the request of the Government of Algeria, the World Food Programme (WFP) has been supporting the most food insecure refugees since 1986, covering basic food and nutrition needs.

What the World Food Programme is doing in Algeria 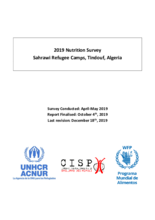 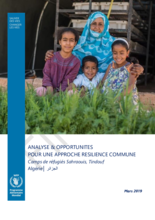 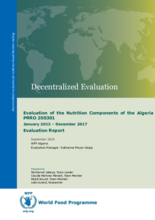 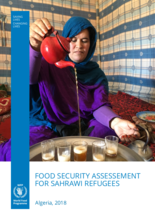 Achieving Zero Hunger is the work of many. Our work in Algeria is made possible by the support and collaboration of our partners and donors, including:

Find out more about the state of food security in Algeria