The Central African Republic (C.A.R.) ranks second to last in the 2018 Human Development Index, with around 79 percent of the country’s 4.7 million population estimated to be living in poverty. Almost 3 million people residing in the C.A.R. require humanitarian assistance. Low productivity, weak markets and high gender inequality are all contributing factors, made worse by recurrent cycles of political crisis and insecurity that hit women in rural communities hardest.

In 2013, a political coup saw intense sectarian violence and caused a 36 percent collapse in GDP. The protracted internal armed conflict has devastated the country since 2014 continuing to force people to flee their homes and causing a severe breakdown in basic social services. Renewed violence since 2017 has led to further displacement with over one million people – one in four citizens - displaced across the country or sheltering in neighbouring countries.

Although a new president and general assembly were elected in March 2016, large areas of the territory are still controlled by armed groups and the security situation remains volatile. While the signing of a Peace Agreement between the Government and 14-armed groups, on 06 February 2019, has improved the stability of certain areas, the humanitarian situation continues to be critical.

With livelihoods disrupted by conflict, food production and household purchasing power have weakened. Rising food prices mean that 65 to 75 percent of disposable income is now spent on food, and, according to the latest IPC Report, 45 percent of the population (2.1 million people) are food insecure. Of these, 85 percent are severely food insecure (1.8 million). Around 40 percent of children aged between 6 months and 5 years are stunted, their growth limited by lack of nutrients in their diet.

In collaboration with other humanitarian organizations, WFP has been providing emergency food and nutrition assistance to conflict-affected people in the C.A.R, reaching some 920,000 people in 2018.

The expansion of WFP’s response includes scaling up its general food distributions and nutrition activities (both prevention and treatment) to include targeting children under 5 as well as pregnant and -nursing mothers to tackle childhood malnutrition at its source.

WFP’s crisis response work is continuing under the prevailing circumstances while its focus is gradually shifting towards developing and supporting the Government’s own Zero Hunger policies and social security programmes. By strengthening the country’s capacity for leading future crisis response and resilience-building activities, such as Food for Assets, school feeding and Purchase for Progress (P4P), WFP aims for a gradual transfer of responsibilities to the Government in the coming years.

What the World Food Programme is doing in Central African Republic 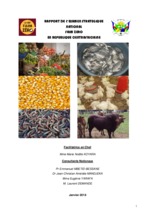 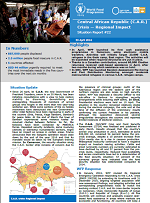 Achieving Zero Hunger is the work of many. Our work in Central African Republic is made possible by the support and collaboration of our partners and donors, including: