Somalia faces catastrophic hunger, with the country devastated by the extreme and worsening drought in the Horn of Africa.

A total of 7.1 million people face acute food insecurity amid the driest conditions in 40 years, following three consecutive failed rainy seasons. Drought is compounding the impacts of other recurrent climate shocks, persistent insecurity and instability. A total of 1.5 million children under 5 face acute malnutrition; 386,000 of these face severe malnutrition and may be at risk of dying without immediate treatment. More than a million people have been displaced by the drought, 750,000 of whom this year only.

Famine could break out in a matter of weeks in some regions if livestock and crops continue to die and soaring prices continue to destroy purchasing power. The last famine declared in Somalia, in 2011, killed a quarter of a million people.

In the face of this crisis, WFP is working to scale up its emergency food and nutrition response to reach a total of 4.5 million people a month – but  needs US$327 million until January 2023 to continue saving lives. The gap between hunger and the humanitarian response is widening. Immediate action is needed to avert a humanitarian catastrophe.

Crisis response
WFP, the largest humanitarian agency in Somalia, saves lives by providing food and nutrition assistance to people in crisis. WFP works both directly and through 100+ partners, even in areas where insecurity makes access challenging. Somalia is also the location for WFP’s largest anticipatory action in Africa, helping drought-affected households to prepare for a potential fourth poor rainy season with cash transfers and an information campaign. Resilience
WFP changes lives in Somalia by helping to build sustainable, long-term resilience at community, state and national level against recurrent shocks like drought and flooding. This includes working with the Government to implement social protection programmes; strengthening climate-smart food systems, e.g. by training smallholder farmers and linking them to new markets; and developing the capacity of national institutions to sustainably address hunger. 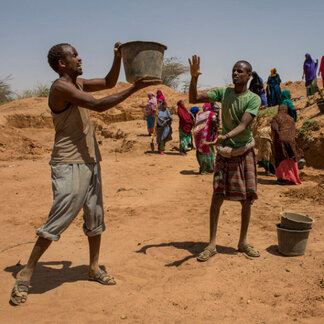 Government and UN integration
WFP works with all levels of government in alignment with Somalia’s Ninth National Development Plan, the United Nations Sustainable Development Cooperation Framework, and the Humanitarian Response Plan. One example is WFP’s support for Baxnaano, a Government-owned national safety net. WFP’s work is integrated with the broader United Nations, including joint programming with the United Nations Children’s Fund and the Food and Agriculture Organization. 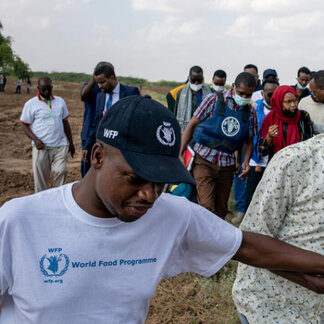 Drought in Somalia: The race to save lives as the climate crisis and conflict drive hunger