The country is home to the second largest refugee population on the continent, hosting 928,600 registered refugees from South Sudan, Somalia, Sudan, Eritrea and Kenya. Unrest in parts of the country has also led to a surge in the number of internally displaced people.

Recurrent drought and failed harvests have left a negative legacy on many families, who have lost livestock and other productive assets. The Somali Region remains the epicentre of drought and has also been prone to flash floods, with an estimated 1.8 million people in need of life-saving food assistance.

Despite these challenges, the Government's five-year Growth and Transformation Plans aim to move the country to middle-income status by 2025, by sustaining rapid growth and speeding up structural transformation. WFP supports this goal through a range of life-saving and resilience-building activities, as well as by providing assistance in refugee camps and to internally displaced people. Working with the Government and other key partners, WFP uses food, cash, nutrition assistance and other approaches such as training local work forces and restoring infrastructure, to improve nutrition, empower women, develop local capacities and enhance preparedness to climate-related shocks.

What the World Food Programme is doing in Ethiopia 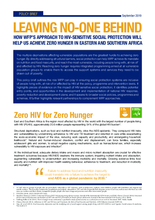 Leaving no-one behind: How WFP's approach to HIV-sensitive social protection will help us to achieve Zero Hunger in East and southern Africa 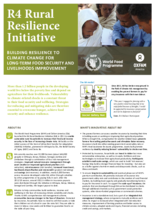 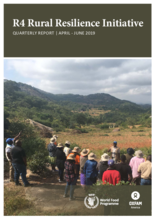 Achieving Zero Hunger is the work of many. Our work in Ethiopia is made possible by the support and collaboration of our partners and donors, including:

Find out more about the state of food security in Ethiopia