The Republic of Congo is a resource-rich, middle-income country that has the potential to achieve Sustainable Development Goal 2 and reach Zero Hunger and improved nutrition by 2030.

The country, however, continues to face high levels of poverty and inequality, recurring localized conflict and regional insecurity. Combined, these factors are increasing the levels of malnutrition, food insecurity and displacement as families leave their homes in search of safety, incomes and better futures.

More than 90 percent of arable land remains uncultivated, and agriculture is largely limited to subsistence crops, mainly cassava, bananas and peanuts. Domestic food production covers only 30 percent of the country’s needs, the Congo relies extensively on food imports from overseas. WFP estimates that 15 percent of households report poor or limited food consumption, with peaks of 30 percent in rural areas.

The Republic of Congo faces a triple burden of malnutrition among children under 5, with the coexistence of stunting (21.2 percent), overweight (5.1 percent) and deficiencies in iron, vitamin A and iodine.

Indigenous people, whose traditional livelihoods are affected by climate change-related deforestation, experience difficulties in accessing resources and social services. UNICEF estimates that 65 percent of indigenous children are not in school.

Since 2019, the northern part of Congo has faced recurrent devastating floods that generated new humanitarian needs. Up to 200,000 people are affected by flooding each year, that destroys homes, agricultural land and infrastructure.

Refugees from the Central African Republic (CAR) have been present in the Republic of Congo since the 2013 coup, but waves of violence in December 2020 led to new displacement, raising the number of CAR refugees to almost 30,000. They are mainly settled in Likouala (North), an area heavily affected by food deficits, recurrent floods and few agricultural opportunities, which limits their prospects of self-sufficiency, leaving them highly dependent on humanitarian food assistance.

Building on its long experience in responding to crises and building resilience both in the Republic of Congo and globally, the World Food Programme (WFP) is working across the country to support Government efforts to achieve Zero Hunger. WFP’s role is increasingly shifting from operational to advisory, through building government capacity in social protection, particularly school feeding and safety nets, climate change adaptation, emergency preparedness and crisis response.

What the World Food Programme is doing in Congo

WFP provides food or cash assistance and nutrition support to 176,000 vulnerable people, including refugees, asylum seekers, returnees, flood-affected populations and people living in urban areas who have been impacted by the economic consequences of COVID-19. Where appropriate, the assistance is combined with the creation or rehabilitation of assets which enhance the resilience of communities, families and individuals to shocks.

WFP provides daily hot school meals to 166,000 children in areas that are most affected by malnutrition. Food is increasingly sourced directly from local farmers, with a special focus on schools in rural areas. WFP assists around 4,500 indigenous children enrolled in ‘ORA’ schools in the remote Likouala and Sangha provinces to give these children the opportunity to enter the school system. 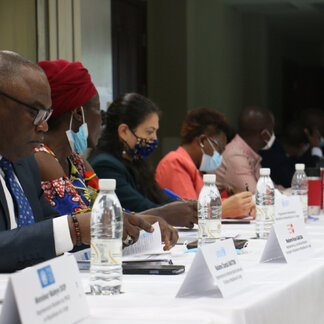 Building on its recognized supply chain expertise and infrastructure in Congo, WFP provides UN agencies, the Government, and other partners with on-demand supply chain services. This includes the procurement and management of vehicles, transportation of staff, distribution of non-food-items and warehousing, so they can assist vulnerable families. WFP also supports humanitarians to travel via the United Nations Humanitarian Air Services (UNHAS). 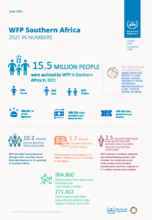 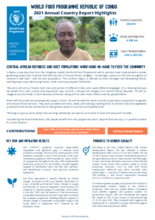 Achieving Zero Hunger is the work of many. Our work in Congo is made possible by the support and collaboration of our partners and donors, including:
The Government of the Republic of the Congo USA Japan Brazil European Union
France Italy China
View all

Find out more about the state of food security in Congo