Sharing the Caribbean island of Hispaniola with Haiti, the Dominican Republic is an upper-middle-income country ranking 98 out of 189 in the 2019 Human Development Index.

Over the past decades, the country has experienced sustained economic growth and stability, and has succeeded in meeting the Millennium Development Goal of halving the number of hungry people by 2015. However, income distribution remains unequal, quality of health services is inadequate, and poverty still affects just over 40 percent of the population, with 10.4 percent living in extreme poverty. Most poor families live in urban areas and 63 percent of them are headed by women.

Poverty and inequality, coupled with a lack of diverse diets and a weak agricultural structure, lie at the roots of food insecurity and overlapping nutritional problems. These include chronic undernutrition, which affects 7 percent of children under 5; overweight; and anemia, which affects one in three women of reproductive age and up to 61 percent of children aged between 6 and 11 months.

The Dominican republic suffers from recurrent natural shocks and, according to the Global Climate Risk Index, it is one of the most vulnerable countries to climate change. In 2016, after suffering from drought in rural areas, the country was indirectly affected by Hurricane Matthew that hit Haiti, as well as by severe floods as a consequence of continuous rains in the northern region.

The World Food Programme (WFP) has been present in the Dominican Republic since 1969. Our work focuses on strengthening national capacities and programmes in the areas of nutrition, social protection, emergency preparedness and disaster risk management. We work in partnership with the government, contributing to the National Development Strategy. WFP also supports the development of public policies to reduce hunger and malnutrition.

What the World Food Programme is doing in the Dominican Republic

Nutrition
WFP supports the government's social safety net programme, Progresando con Solidaridad, in implementing its Nutrition Component, which includes provision of specialized nutritious food through 1,300 primary health care centres nation-wide in partnership with the Ministry of Health, as well as education and community mobilization for improved nutrition, and capacity building for government community staff. WFP also supports public policies in food security and nutrition, and the implementation of a plan for rice fortification aimed at combating micronutrient deficiencies. 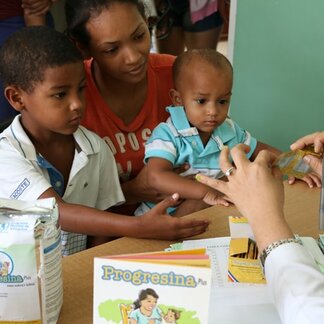 Food security and HIV
With most of the people living with HIV reporting their families as food insecure, WFP provides support through the promotion of urban gardening and peer nutritional counselling to women living with HIV in three municipalities. WFP also provides specific training to medical personnel in 77 integrated health care centres. 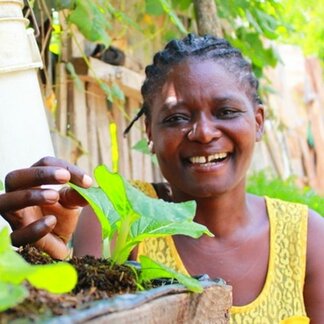 Emergency preparedness and disaster risk management
WFP supports the strengthening of national and sub-national capacities to reduce risk and provide humanitarian assistance to populations affected by disasters, with a particular emphasis on food security. The interventions focus on improving climate risk analysis and strengthening national Early Warning Systems, incorporating food security, for sudden and slow-onset crisis, as well as current government preparedness plans. South-South Cooperation with other countries of the region is a key component of this area. 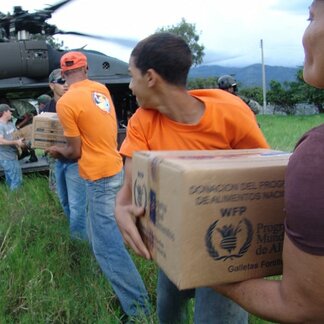 Achieving Zero Hunger is the work of many. Our work in the Dominican Republic is made possible by the support and collaboration of our partners and donors, including:
Dominican Republic Germany Multilateral donors UN funds