46%
of Lebanese households are food insecure
88%
of Syrian refugees in Lebanon are extremely poor
6.8 million
population

Small, densely populated and lying at the heart of a region beset by conflict and political instability, Lebanon is experiencing a profound socioeconomic crisis on top of the protracted Syrian refugee crisis.

Decades of financial mismanagement and weak governance culminated in mass protests and the unravelling of the financial system in October 2019. The ongoing failure since then to implement urgent political and macroeconomic reforms has led to what the World Bank has called one of the top three most severe economic crises globally since the 19th century.

Between October 2019 and April 2022, the national currency lost more than 90 percent of its value, and the price of the basic food basket monitored by WFP recorded an eleven-fold increase. The annual inflation rate overall for 2021 was 201 percent, the highest of all countries tracked by Bloomberg.

The consequences of the war in Ukraine are also heavily impacting Lebanon, creating additional inflationary pressures. With food exports suspended from the world’s grain basket, and imports affected by the global rise in prices for fuel and commodities, prices of food in Lebanon have already risen.

The human impact of the crisis is dire: poverty and food insecurity for all populations in Lebanon have sharply increased. Inflation-deteriorated purchasing power, high unemployment, stagnant wages and limited social safety nets have had severe consequences on the living conditions of not only the poorest, but also the middle class.  Now in 2022, 3.4 million people in Lebanon need humanitarian assistance.

With the constant increase in food prices, food security has become a major concern. Half of Lebanese families and almost the entire refugee population are worried about having enough food to eat.

Having shown exceptional solidarity towards people fleeing war and insecurity in neighbouring countries, Lebanon has the world’s highest per capita refugee presence, estimated at 25 percent of the overall population. The spill over from the ongoing war in Syria has exacerbated economic and social challenges, placing a strain on existing resources. According to WFP estimates, the number of Syrian refugees who are severely or moderately food insecure stands at 1.3 million, of whom 1.2 million are receiving assistance.

As the Lebanese and refugee populations were already suffering from the economic recession compounded by the COVID-19 pandemic, a devastating blast hit the capital’s port on 4 August 2020, destroying homes, businesses and the major grain silos. The World Food Programme (WFP), along with other international and national actors, acted swiftly to ensure people were able to secure their food and other essential needs, and to rebuild their destroyed homes and livelihoods.
With the initial aim to respond to the Syrian refugee crisis in Lebanon, WFP has been providing life-saving assistance to refugees in the country since 2012. Since then, WFP’s role has expanded, ensuring that both vulnerable Lebanese and refugees have sufficient nutritious food throughout the year. WFP also provides technical assistance and capacity strengthening support to the Government of Lebanon.

What the World Food Programme is doing in Lebanon

Economic crisis response for vulnerable Lebanese
Food insecurity amongst the Lebanese increased to 46 percent in 2021. In response, WFP is ensuring that 100,000 Lebanese families have their food needs met through in-kind food distributions in 2022. The provision of food parcels helps counter the impact of inflation and the decreased purchasing power following the depreciation of the national currency and hyperinflation.

Food and basic assistance for refugees
WFP provides Syrian refugees and refugees of other nationalities with cash assistance through electronic cards, allowing them to meet their food and other essential needs by either buying food items in any of WFP’s 400+ contracted shops across Lebanon or withdrawing cash from ATMs to spend on what they need. The system allows beneficiaries to choose their food, gives them access to fresh produce and significantly boosts the local economy.

Beirut port explosion response
As an immediate response to the Beirut blast, WFP allocated food parcels to families and communal kitchens in the blast-stricken area. WFP also brought into Lebanon 12,500 metric tons of wheat flour. Following the immediate response, WFP provided cash assistance to 89,000 vulnerable people affected by the explosion for a period of six months. WFP also provided support to over 200 businesses reeling from the devastating impact of the Beirut blast. 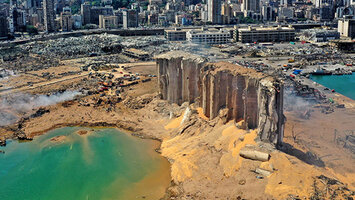 School meals
WFP distributes daily nutritious snacks or cold meals to vulnerable Lebanese and refugee school children in public schools across Lebanon. The snack package addresses the dietary diversity among targeted students, and relieves parents from budgeting for their children’s lunches. Additionally, by targeting schools located in vulnerable communities across the country, the programme promotes a healthy school environment for all communities. 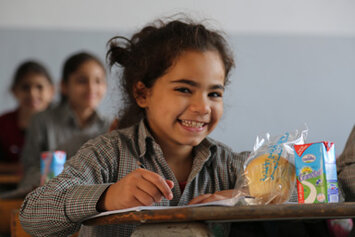 Livelihoods
WFP provides livelihood assistance to vulnerable Lebanese and refugees of different nationalities. Participants receive trainings to build their individual capacities, along with short-term cash assistance. As the economic crisis heavily affected people’s ability to find a reliable source of income, WFP’s livelihoods interventions empower participants, giving them the opportunity to provide for themselves in a challenging environment. 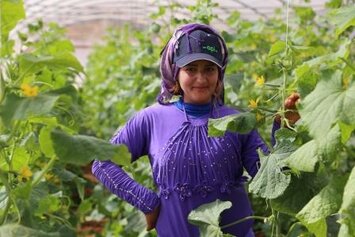 Social protection
WFP supports the food component of the National Poverty Targeting Programme (NPTP), Lebanon’s first targeted social safety net programme. The cash assistance is delivered via e-cards and can be used in WFP-contracted shops or withdrawn at ATMs. The assistance allows the most vulnerable Lebanese to meet their food and other essential needs. WFP also assists the Lebanese government, with its tools and expertise, in the implementation of the NPTP. 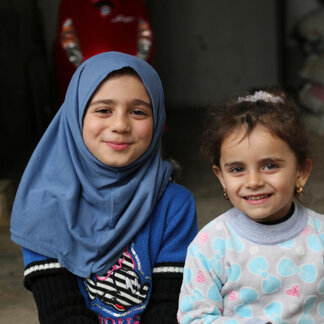 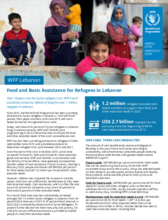 Expanding Redemption Options for the National Poverty Targeting Programme in 2022 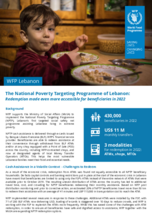 WFP Lebanon – Support to the National Poverty Targeting Programme in 2022 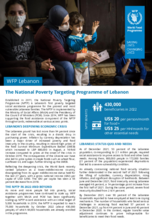 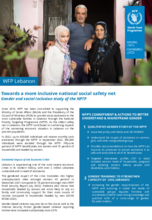 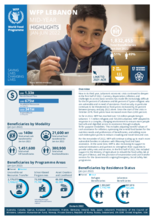 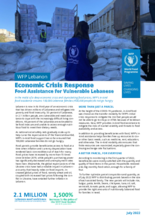 A lifeline in Lebanon: How cash grants empower families amid economic hardship

Achieving Zero Hunger is the work of many. Our work in Lebanon is made possible by the support and collaboration of our partners and donors, including:
Australia Canada Denmark European Commission European Union Regional Trust Fund
France Germany -BMZ Germany GFFO Ireland Italy Norway Private donors Switzerland UK USA
View all

Find out more about the state of food security in Lebanon