Venezuela (Bolivarian Republic of) faces a long-running socioeconomic crisis that is already affecting people across the country. In 2020, the Gross Domestic Product shrank for the seventh year in a row – this time by 30 percent.

According to estimates by the Economic Commission for Latin America and the Caribbean, in 2018 a third of all people living in extreme poverty in Latin America were in Venezuela, compared to 8 percent in 2014.

Over the years, access to nutritious food and a diversified diet has become increasingly expensive. According to the World Food Programme (WFP)’s own assessment, 2.3 million people were severely food insecure and in need of immediate humanitarian assistance in 2019. This is likely to have been exacerbated by the impact of the COVID-19 pandemic, which has strained livelihoods across the whole Latin American region.

The pandemic has forced many businesses to close or decrease activities, and also reduced remittances from workers living abroad. Additionally, household income has been affected, as the cost of living continues to rise due to inflation, which reached a cumulative 2,960 percent between January and December 2020. People who do not have access to foreign currency, or other sources of income beyond the minimum wage, are struggling to cope.

Economic difficulties have led to large-scale population movements. As of July 2021, there were an estimated 5.6 million Venezuelan migrants, asylum-seekers and refugees worldwide. Neighbouring countries – particularly Colombia, Ecuador and Peru – have received more than 80 percent of them.

In April 2021, the Government and WFP signed a memorandum of understanding, whereby WFP could establish a presence in the country and provide humanitarian support. WFP’s operations in the country focus on the provision of school meals to children up to the age of 6 in the states most affected by food insecurity.

What the World Food Programme is doing in Venezuela

In July 2021, WFP started distributing food supplies to children enrolled in pre-schools, and to school staff in areas identified by WFP as most affected by food insecurity. The target is to reach an estimated 1.5 million people, mostly children, with food assistance by the end of the 2022-23 school year. While schools remain closed due to the COVID-19 pandemic, monthly take-home rations are distributed to the children’s parents or caretakers. 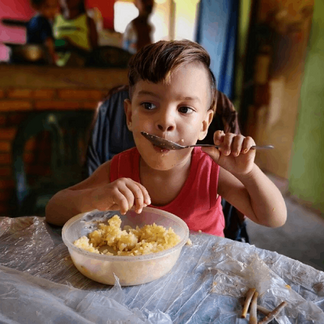 As part of its effort to support local actors, WFP works with partners and school staff to strengthen their capacities to ensure that the school meals programme is implemented safely, respecting hygiene practices and humanitarian principles. WFP and partners will also assess the infrastructure of hundreds of schools. They will identify the rehabilitation needs to kitchens, food storage spaces and best practices in fuel use, to provide the best environment to serve hot meals in schools. 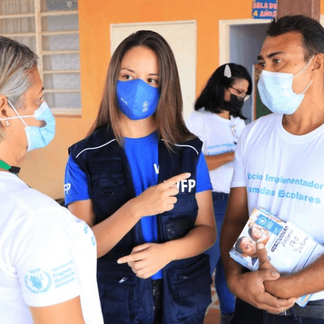 “Now, my daughter is guaranteed at least a meal a day”

Los caminantes: an odyssey across the Andes

Operations in Venezuela (Bolivarian Republic of)