Guatemala is facing serious challenges in achieving Sustainable Development Goal (SDG) 2 on Zero Hunger, which includes the elimination of all forms of malnutrition by 2030.

Almost half the population cannot afford the cost of the basic food basket. As a result, the prevalence of stunting in children under 5 is one of the highest in the world – and the highest in Latin America and the Caribbean.  At 46.5 percent nationally, the stunting rate climbs up to 70 percent in some departments, with peaks as high as 90 percent in the hardest hit municipalities.

A multi-ethnic country with a rich cultural heritage, Guatemala is one of the most unequal countries in Latin America. While two thirds of the overall population live on less than US$ 2 per day, poverty affects indigenous people disproportionately: 80 percent of them experience deprivation in multiple aspects of their lives, including food security, nutrition, health and education.

Guatemala is among the 10 countries that are most vulnerable to natural disasters and the effects of climate change. Over the past three years, extended dry seasons have had a severe impact on the livelihoods of subsistence farmers, who rely on rain-fed agriculture, especially in the Dry Corridor. Poor soil conditions, over exploitation of forest resources, degraded lands, small size of plots, and lack of access to credit, agricultural supplies and technical assistance drive agricultural productivity and profitability further down.

The World Food Programme (WFP) has been in the country since 1974 and has a long tradition of working with government authorities, other UN agencies and other partners to promote food security and good nutrition for the most vulnerable, including rural women and children.

In line with SDG 2 targets and those set by the Government, WFP is supporting Guatemalan institutions in their efforts to reduce food insecurity and malnutrition, including through the strengthening of national social programmes. WFP also works with rural communities to enhance their resilience to climate-related shocks and access to markets for smallholder farmers.

Through the Storytellers project, launched in the province of Zacapa on September 2017 in collaboration with INTECAP, an institution dedicated to technical training throughout the country, and the national daily paper Prensa Libre, WFP is providing selected youths from vulnerable communities with digital communications skills to raise awareness about their difficult living conditions.

Show more
16.3 million
population
2/3
of the population live on less than US$2 per day
46.5%
of children under 5 are stunted
Download country brief

What the World Food Programme is doing in Guatemala 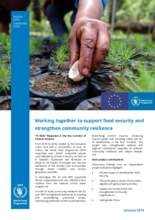 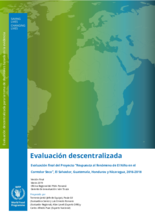 Achieving Zero Hunger is the work of many. Our work in Guatemala is made possible by the support and collaboration of our partners and donors, including:

Find out more about the state of food security in Guatemala