13 million-plus
people in Tigray, Afar and Amhara regions need food assistance due to conflict
10 million
approximate number of people across the country facing severe hunger due to drought
7 million
people had been reached through WFP’s Northern Ethiopia Conflict Response and Southern Ethiopia Drought Response as of mid-May

Ethiopia is currently facing two emergency situations, which exacerbate levels of food insecurity in the country.

Despite the immense operational challenges, WFP had distributed more than 12 million food baskets to 4.8 million people across all three regions as of mid-October.

The humanitarian truce declared by the Government in March allowed WFP and partners to reach almost 5 million people over 5 months in Tigray. However, but since the resumption of the conflict at the end of August, no humanitarian supplies have entered the region. WFP’s teams are supporting those most in need across Afar, Amhara and Tigray - but fuel, funding and the free movement of supplies across the lines of control are urgently needed.

Due to a lack of funding and supply shortages, WFP was only able to reach 10 percent of mothers and children across northern Ethiopia in need of nutrition support in August.

US$238 million is urgently needed to rapidly scale up WFP’s operations in northern Ethiopia.

Meanwhile, the country is experiencing the driest conditions recorded since 1981, with severe drought leaving an estimated 9.9 million people across the country facing hunger and 24 million people in need of humanitarian assistance.

The shortages of water and pasture are devastating livelihoods, forcing families from their homes across the Somali, Oromia, Sidama, and Southern Nations, Nationalities and Peoples’ regions in the south and southeast.

With the October to December 2022 rains projected to fail, food insecurity will rise in the months ahead.

A total 2.2 million children in Ethiopia are acutely malnourished due to the impact of drought, at least 3.5 million livestock have already perished and 8.2 million people do not have access to enough clean water for drinking, cooking and cleaning.

WFP has already supported over 3.3 million people with a combination of emergency relief food and anticipatory actions to save lives in the short-term and build resilience in the long-term.

However, to deliver its full drought response to 3.5 million people, WFP requires US$88 million over the next six months.

Conflict
WFP is targeting over 3.3 million people across all three regions with unconditional emergency food and nutrition assistance. This includes 2.13 million in Tigray, 650,000 in Amhara, and up to 626,000 in Afar. The Government and partners are providing assistance to the rest. Drought
WFP is helping communities recover faster and better from the drought through microinsurance schemes, infrastructure such as solar powered water pumps for bore holes and amplifying early warning systems to trigger early financial support. WFP targets to reach 3.5 million people in need due to drought in Somali region with food assistance. 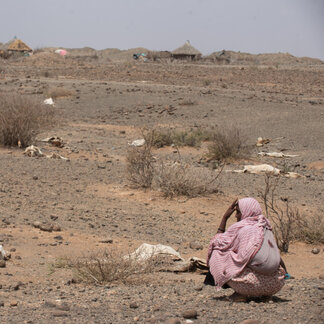 WFP need US$194 million to rapidly scale up its operations in Northern Ethiopia and US$281 million to deliver its full drought response.
Donate now

Basketball v hunger: A slam dunk for the rights of persons with disabilities in Ethiopia