Chad is a landlocked Sahelian country in central Africa, with one of the highest levels of hunger in the world - 42 percent of its population live below the poverty line. A low-income country with limited income-generating opportunities, and restricted access to social services, it is ranked 187th out of 189 countries in the 2020 Human Development Index.

Regional conflicts, in combination with environmental degradation, rapid desertification and intercommunal tension over diminishing natural resources, have contributed to exacerbate hunger and poverty in the country. The people in Chad are among the most affected by the global climate breakdown. The negative effects of COVID-19 on socio-economic activities further accentuate the state of poverty of an already chronically vulnerable population.

Many depend on farming and livestock for their livelihoods, but advancing agricultural practices is challenging as rain patterns are changing and droughts are frequent. This places even more strain on vulnerable families living in the Sahelian belt. Around 37.8 percent of children aged under 5 suffer from stunting, according to the Global Nutrition Report, with low height for their age caused by chronic malnutrition. The health of pregnant and breastfeeding women is poor, with high maternal mortality rates due to inadequate access to health services. Access to basic education is also limited.

Chad hosts one of the largest number of refugees in the region, and one million people are in a situation of forced displacement in the country; these include 570,000 refugees, 406,000 internally displaced persons (IDPs) around Lake Chad, as well as 107,000 Chadian returnees. The recent influx of refugees who have fled conflict in Cameroon has put additional pressure on Chad’s already limited resources.

Displaced people, and other poor communities, in the Lake Chad Basin and the east and south of the country are dependent on humanitarian assistance for survival. The November 2021 Cadre Harmonisé estimates that 1.7 million people will be severely food insecure from June to September 2022. These results indicate a third consecutive year of severe food insecurity and the worst lean season of the last 10 years.

The Government’s overall main development priorities are embedded in “Vision 2030: the Chad We Want”, a strategic framework to be implemented through consecutive development plans.

The World Food Programme (WFP) runs a variety of activities in Chad, with a focus on life-saving emergency activities and strengthening the country’s long-term resilience. In our mission to end food insecurity and malnutrition in Chad, we continue to work alongside the Government and other UN agencies and partners.

WFP operations in Chad help people affected by the crisis in the Sahel. More information can be found on the Sahel emergency page

What the World Food Programme is doing in Chad 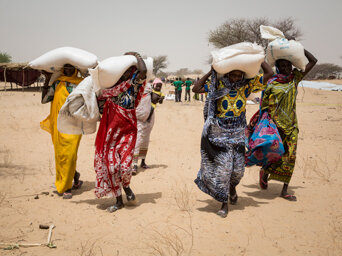 Support for refugees, IDPs and host communities
WFP provides life-saving food and nutritional assistance to over 530,000 refugees from Sudan, the Central African Republic (CAR), Nigeria and Cameroon, and 230,000 displaced persons in the Lake province. In support of the government’s National Response Plan for the lean season, WFP is aiming to assist 1,061,040 people in the Sahelian belt from June to September 2022. 102,000 Chadians, who fled violence in CAR in 2013, still live in transit sites and host villages in the South of Chad. 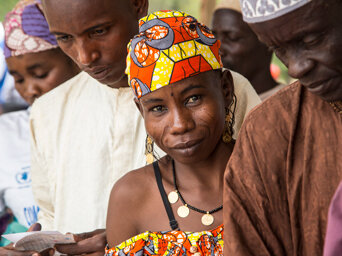 School meals
WFP supports the Ministry of Education, regional and local educational authorities, schools, and communities with technical assistance and provides school meals to preschools and primary schools as well as assistance to adolescent girls to increase attendance rates. WFP provides nutritious school meals to children in food insecure areas of the Sahel, where food production is poor even in relatively good years. School meals encourage school enrolment, which is low in these regions. We also provide an emergency school meal programme in the Lake Chad region. In 2021, WFP school meals reached a total of 200,000 school children. 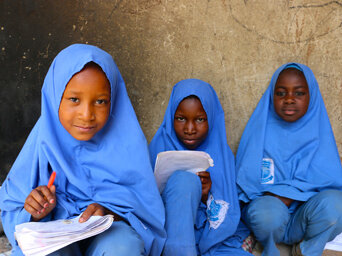 Resilience
WFP has continued to scale up the integrated resilience programme and reached nearly 486,000 people in more than 211 villages across the Sahel, who benefitted from asset creation activities. Since the beginning of the scale-up in 2018, together with the communities and partners, WFP has rehabilitated nearly 2,600 hectares of degraded land and created some 385 hectares of gardens – the equivalent of almost 4,200 football fields - to produce fresh vegetables and fruits. 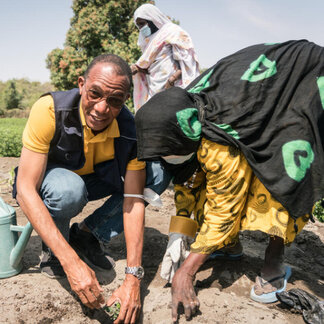 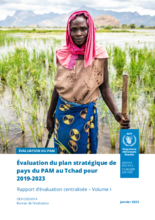 Scaling up Integrated Resilience in the Sahel – December 2022 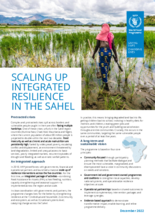 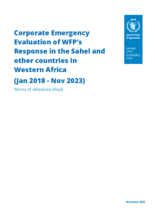 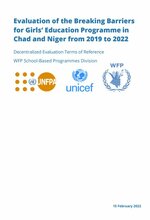 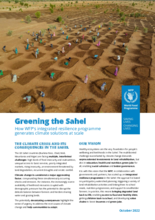 Find out more about the state of food security in Chad