Food assistance: a step to peace and stability

With almost 60 percent of the world’s 828 million hungry people living in areas affected by armed violence, conflict is the single greatest challenge to achieving zero hunger.

Assistance provided by the World Food Programme (WFP) is not just a life-saver for people trapped in conflict, living under siege, or on the run after being forced out of their homes – it can also be the first step towards peace, helping to ease tensions that could escalate into conflict.

Awarding the 2020 Nobel Peace Prize to WFP, the Norwegian Nobel Committee described the link between hunger and armed conflict as a vicious circle in which “war and conflict can cause food insecurity and hunger, just as hunger and food insecurity can cause latent conflicts to flare up and trigger the use of violence.”

The link had previously been acknowledged by the  UN Security Council in Resolution 2417  (adopted in May 2018), which also reconfirmed the prohibition on the use of hunger as a weapon of war – whereby armed factions block access to food to force civilian populations to surrender or leave –  and recognized that the world will never be able to eliminate hunger unless there is peace.

The Nobel Peace Prize gives WFP recognition “for its efforts to combat hunger, for its contribution to bettering conditions for peace in conflict-affected areas and for acting as a driving force in efforts to prevent the use of hunger as a weapon of war and conflict.”

When, in 2018, Yemen was facing famine, a massive scale-up of WFP operations in war-torn Yemen was able to bring the country back from the brink. Today, however, millions of people in parts of Yemen and other conflict-affected countries - such as the Democratic Republic of Congo, Nigeria and South Sudan - are again at risk of dying of hunger if food assistance does not reach them.

Preliminary findings from a joint research study with the Stockholm International Peace Research Institute (SIPRI), focusing on El Salvador, Iraq, Kyrgyzstan and Mali, indicate that WFP’s work contributes to improving the prospects for peace by enhancing access to contested natural resources (e.g. water, land); bolstering social cohesion and resolving grievances within and between communities; increasing opportunity and inclusion, including for youth; and increasing citizen-state trust by contributing to strengthening state accountability and service delivery.

In particular, development projects in which people receive food assistance as they build or rehabilitate community infrastructure such as roads, irrigation systems or water reserves can improve food security and reduce competition over resources.

For example, WFP’s engagement of communities to rehabilitate irrigation canals and pipelines in disputed territories along Kyrgyzstan’s border with Tajikistan resulted in an increase in water supplies and agricultural productivity, which in turn helped to prevent inter-community conflict over water.

of the world’s hungry live in conflict areas

of the worst hunger crises, conflict is one of the main drivers

of WFP’s life-saving assistance goes to people facing severe food crises, most of them caused by conflict

WFP And SIPRI - Prospects For Peace

Hunger, Conflict, and Improving the Prospects for Peace fact sheet - 2020

WFP’s Contribution to Improving the Prospects for Peace - 2019 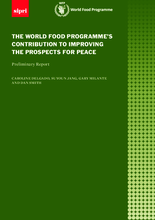 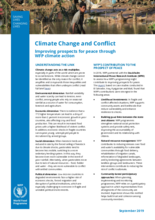 Conflict, economic collapse and coronavirus are pushing Yemen to the edge of famine

‘We can’t end hunger if we don’t end conflict’