Nepal ratified its new constitution in 2015 in a peace process that restructured the country as a federal democratic republic following a decade-long conflict that ended in 2006.This process created a stable government for the first time in 25 years and an enabling environment to make much needed progress toward the achievement of the Sustainable Development Goals (SDGs) by 2030. The 2018 Right to Food Act enshrines food as a fundamental right of every citizen, a powerful step toward meeting Nepal’s commitments to rid the country of malnutrition, hunger and food insecurity. However, the Zero Hunger Strategic Review (ZHSR) conducted in 2017-18 found that the country still suffers from severe food insecurity and malnutrition.

Nepal is among the world’s poorest countries, ranking 148th out of 189, with a Human Development Index (HDI) score of 0.574 in 2019. Challenging geography, civil unrest and a lack of infrastructurecomplicate efforts to improve livelihoods, establish functioning markets and transport food. One quarter of Nepal’s population live below the national poverty line, on less than US$0.50 per day. Approximately 36 percent of Nepali children under 5 are stunted, while 27 percent are underweight, and 10 percent suffer from wasting due to acute malnutrition. Furthermore, food preferences have shifted from healthier and more nutritious traditional foods toward processed alternatives, compounding these problems. Vitamin and mineral deficiencies are also widespread, and 48 percent of pregnant women are anaemic. Malnutrition slows economic growth and feeds a cycle of poverty due to low productivity, poor cognitive function and increased health costs. The impacts of climate change are further expected to result in more frequent and intense disasters that threaten to undermine the country’s progress to date. Located in one of the most seismically active zones in the world, Nepal is also subject to forceful earthquakes. The 2015 earthquakes wiped out 25% of that year’s GDP, refocusing attention on this ever-present threat.

At this critical juncture in Nepal’s development trajectory, the World Food Programme (WFP) is strengthening government capacity and providing support to food security, nutrition, as well as emergency preparedness and response, in support of the country’s goals to achieve the Zero Hunger and to graduate from least developed country to a lower middle-income status by 2023. WFP has been working in the country since 1963, supporting the Government to develop greater food security among vulnerable communities and build resilience to disasters. WFP’s work in Nepal primarily targets the most food insecure, those in the hard-to-reach districts of the Mid- and Far-Western Hills and Mountains.

Show more
28.5 million
population
36%
of children under 5 are stunted
25%
of people live on less than US$ 0.50 per day
Download country brief

What the World Food Programme is doing in Nepal 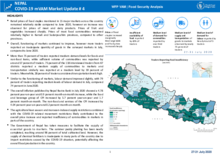 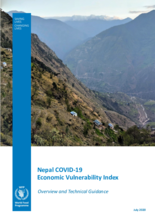 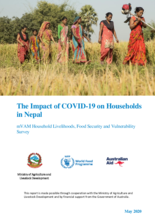 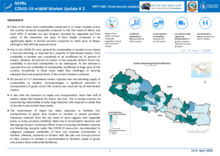 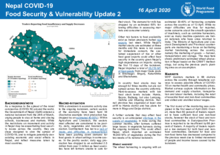 Achieving Zero Hunger is the work of many. Our work in Nepal is made possible by the support and collaboration of our partners and donors, including:

Find out more about the state of food security in Nepal