Despite economic progress, poverty, inequality and violent crime in Honduras continue to severely hinder development and the achievement of Sustainable Development Goal (SDG) 2 on Zero Hunger and improved nutrition.

Income distribution is highly unequal and vast disparities exist between urban and rural areas, regions and social groups. Poverty – affecting 60 percent of the population – is at the root of chronic food insecurity in Honduras. The most vulnerable include indigenous populations in rural areas (where more than half of the extremely poor are concentrated), women, girls, children under 5 and people with disabilities and living with HIV/AIDS.

The country’s vulnerability to extreme climatic events exacerbates food insecurity. In the southern and western regions – corresponding to Honduras’ Dry Corridor – four years of continuous drought have eroded people’s ability to secure sufficient nutritious food all year round. In 2015, irregular rainfalls resulted in the loss of more than half the crops. To cope, people have resorted to migration or the sale of productive assets.

Almost three quarters – 72 percent – of families depending on agriculture either own small parcels of land or work as laborers for large land owners. Limited access to land, technology and agricultural assets hampers the potential development of the agricultural sector.

Poorly diversified diets and a lack of nutritional awareness result in overlapping nutritional problems including stunting, mineral and vitamin deficiencies and overweight/obesity.

Stunting in children under 5 still stands at 23 percent, with peaks of 40 percent in the Dry Corridor, where a large proportion of the indigenous population lives. Anemia affects 29 percent of children under 5 –  with a prevalence of up to 60 percent in babies between 6 and 8 months – as well as 15 percent of women and girls of reproductive age. Rapid urbanization, leading to reduced physical activity and increased consumption of processed foods rich in fats, sugar and salt, is driving up levels of overweight and obesity and the risk of chronic diseases.

The World Food Programme is contributing to the achievement of SDG 2 in Honduras by supporting the Government’s efforts to improve nutrition, enhance the resilience of smallholder farmers and assist families affected by rapid and slow-onset disasters.

Show more
9.1 million
population
60%
of people live in poverty
23%
of children are stunted, with peaks of up to 40%

What the World Food Programme is doing in Honduras 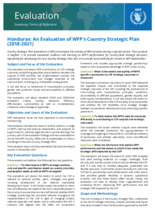 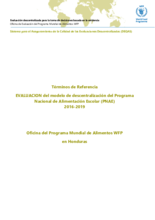 Achieving Zero Hunger is the work of many. Our work in Honduras is made possible by the support and collaboration of our partners and donors, including:

Find out more about the state of food security in Honduras