Southern Honduras looks shockingly similar to the Niger, Chad or countries in the arid Sahel region of West Africa. Years of drought have left this once productive area scorched and barren.

The storms were for a huge blow to people already reeling from the economic effects of the COVID-19 pandemic, crime and years of drought.

World Food Programme (WFP) data indicates a quadrupling of hunger since 2018 in the so-called dry corridor countries of Honduras, El Salvador, Guatemala and Nicaragua — almost 8 million people don’t have enough to eat. Among them are 1.7 million people in need of emergency food assistance. In January, 15 percent of people surveyed by WFP said they were making concrete plans to migrate — that’s double the number two years ago.

Erick Galeas lives about 45 minutes from Choluteca with this wife and their son. Though he has a degree in agronomy, he is unemployed. He had planned to study four more years to get an advanced engineering degree but he can no longer afford to pay for his studies.

We met Erick in San Miguel, a small village near the border of Nicaragua where migrants frequently pass on their way north. Here there is no electricity and people must walk 2 km to fetch water.

We passed some cows on the way, all skin and bones.

Erick said the only option left was to migrate to the US, leaving behind his wife, Brenda, and 1-year-old son, Dilan.

Surrounded by his neighbours, Erick broke down weeping as he talked about having to leave — torn between the fear that if he stayed he’d not be able to offer his son the few options he himself has had, and the risk of his son growing up without a father to guide him.

“Suffering in the streets, losing himself in that world of drugs, alcoholism or getting into criminal gangs — that is not the life I want for my son,” says Erick.

Around 7pm, a few days later, in the parking lot of San Pedro Sula’s bus station, we met up with a crowd of about 100 people. Illuminated by the red neon glow of a Little Caesar’s Pizzeria sign, a new caravan of migrants was preparing to begin the month-long, 3,000 km journey on foot through Guatemala and Mexico to the United States.

The children hugged small teddy bears. Almost everyone seemed scared. Some had made the journey four or five times, only to be turned back after harrowing encounters of attempting kidnappings, extortion, criminal gangs and border patrols.

Stefany was sent back from Guatemala in January but was trying again.

Travelling legitimately during a pandemic, with constantly changing immigration rules, COVID-19 test requirements and fewer flight connections, requires patience and nerves of steel. Contracting the virus aside, those attempting to migrate illegally with their children risk detention, robbery, kidnap and murder — so it’s truly a last resort.

The next day, we drove to the border with Guatemala where the caravan was due to cross.

The caravan had left the parking lot around 4am, with some people on foot and many in buses. NGOs had predicted a caravan of between 5,000 to 15,000 people — similar to another that was turned back by Guatemala security forces from the same border crossing in January.

At the border there was confusion and anger as identity documents and COVID tests were checked, and some were not allowed to continue. Determined as they were to cross the border, nobody we spoke to actually wanted to leave. They all said their options had run out.

Still, there is hope for those in the dry corridor who want to stay. WFP agronomists help communities struggling with the effects of climate change to plant drought-resistant crops, harvest water and use other techniques to grow enough food to feed their families.

WFP provides food and nutrition when needed. In urban areas where there is an upsurge in hunger, school meals and WFP cash and vouchers give people the option to stay in their communities and helps the local economy.

Back in San Miguel, WFP is starting a programme to teach new agricultural technique to grow crops less dependent on water, like cashews and mangoes. There is also a water harvesting and seed nursery project in addition to emergency food rations. It will take time for these programmes to bear fruit. For Erick who is feeling that time is running out, WFP projects offer a glimmer of hope that he can stay at home with his family. 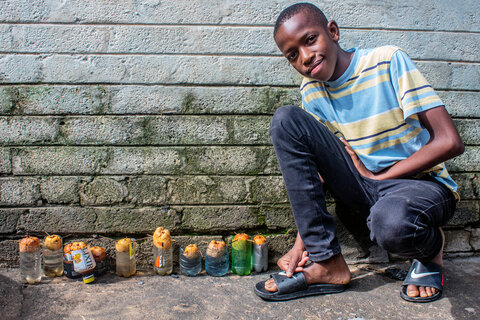