Over the years, Pakistan has become a food surplus country and a major producer of wheat which it distributes to needy populations through various mechanisms, including the World Food Programme (WFP).

However, the national nutrition survey 2018 showed that 36.9 percent of the population faces food insecurity. Primarily, this is due to limited economic access by the poorest and most vulnerable group of the population – particularly women – to an adequate and diverse diet. The survey also showed the second highest rate of malnutrition in the region with 18 percent of children under 5 suffer from acute malnutrition, around 40 percent of the children in the same age group are stunted and 29 percent are underweight. All complementary feeding indicators are far below acceptable levels, only one in seven children aged 6–23 months receives a meal with minimum dietary diversity, with at least four diﬀerent food groups, and around 82% children are deprived of the minimum number of the meals a day.

An average Pakistani household spends 50.8 percent of monthly income on food. This makes them particularly vulnerable to shocks, including high food prices. The impact of climate change and population displacements exacerbate the situation.

As a result of social and cultural norms and practices, women and girls face difficulties accessing humanitarian assistance and services. Girls’ access to education, especially in areas bordering Afghanistan (the newly merged regions of Khyber Pakhtunkhwa - KP) and Baluchistan, remains a challenge.  There is a strong correlation between girls’ level of education and all forms of undernutrition (stunting, wasting, and underweight). Nationwide, 7.3 million children of primary school age are not enrolled, 57 percent of whom are girls.

WFP’s work in Pakistan aligns with the Government’s priorities as defined in its Vision 2025 and as has been further highlighted with respect to malnutrition and reducing rates of stunting by Prime Minister Imran Khan, elected in 2018.  WFP supports Government-led efforts to improve food and nutrition security among vulnerable communities in response to the effects of recurring human and climatic events; work with communities in the most hazard-prone parts of the country to build resilience; address malnutrition; and create an enabling environment for women to achieve social and economic equality.

WFP is also working hand in hand with the Government of Pakistan to build capacity at national and provincial levels to develop multi-sectorial policies and strategies fully aligned with the Scaling-Up Nutrition (SUN) approach, partner on research initiatives in the areas of food security, join in cash-based welfare programs and provide expertise on disaster risk reduction, health and emergency preparedness and response.

Show more
207.7 million
population
20.5%
of the population is undernourished
44%
of children under 5 are stunted

What the World Food Programme is doing in Pakistan 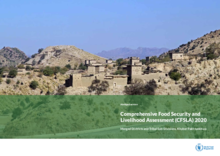 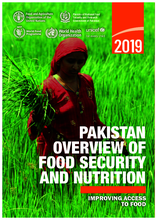 Achieving Zero Hunger is the work of many. Our work in Pakistan is made possible by the support and collaboration of our partners and donors, including:

Find out more about the state of food security in Pakistan