Over the past 15 years, Togo has experienced several periods of socio-political and economic turmoil, which has contributed to high food insecurity and undernutrition levels. A series of devastating floods have also taken their toll on the country’s food security.

Though it has decreased in recent years, the overall poverty rate still stands at 57.8 percent, and the acute malnutrition rate countrywide is at 4.9 percent. Around 30 percent of young children are stunted, with low height for their age due to malnourishment. A survey in 2010 found that 29.7 percent of children under 5 years old are chronically malnourished, with peaks of 43 percent in the Savannah region, the poorest and most deprived region in Togo.

The World Food Programme (WFP) resumed its activities in Togo in 2005, and recent projects have included several emergency operations to provide assistance to internally displaced people, refugees, and vulnerable populations affected by natural disasters such as floods and by the high food price crisis.

What the World Food Programme is doing in Togo 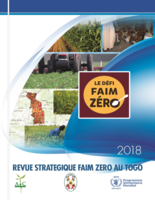 Achieving Zero Hunger is the work of many. Our work in Togo is made possible by the support and collaboration of our partners and donors, including:

Find out more about the state of food security in Togo