Since the 2011 Jasmin revolution, Tunisia has made steady progress in consolidating its democracy, with a new constitution adopted in 2014 and successful legislative and presidential elections.

While hunger levels in the country are defined as low by the Global Hunger Index, a stagnant economy, high unemployment rates, regional disparities and dependence on cereal imports challenge the ability of the most vulnerable to ensure an appropriate, nutritious diet.

Despite considerable progress in addressing malnutrition over the past decades, Tunisia faces overlapping nutrition problems including deficiencies in vitamins and minerals, and obesity. Anaemia, or iron deficiency, is estimated at 28 percent for children under 5 and for pregnant and breastfeeding women and girls.

In spite of advances – and specific provisions in the 2014 constitution – women’s participation in the economy and in politics is substantially lower than men’s. Underpinned by gender stereotypes that describe men as the breadwinners, critical issues include discrimination in the labour market, wage disparities, limited access to economic resources – including loans to start or expand businesses – and low levels of social protection for families headed by women.

In Tunisia, the World Food Programme (WFP) is providing technical support and advice to the Government in its work to strengthen social protection programmes as a tool to enhance social cohesion.

The national school meals programme is central to efforts to improve nutrition, support communities in rural areas and promote the empowerment of women. Through the sourcing of up to 30 percent of the food served in school canteens from school gardens tended by community-based organizations – mainly made up of local women – WFP is improving the nutritional value of school meals, while boosting local economies and the participation in women in them. Further employment opportunities are created by involving local unemployed youths in the delivery of meals prepared in centralized canteens.

Tunisia’s ongoing education sector reform puts school meals in a cornerstone position, and sees the school as the children’s first point of contact with the state. A positive experience at school can foster the children’s love for their country, and build a sense of justice and belonging. WFP supports the Government in its efforts for enhanced national school meals to contribute to ensuring long-term social cohesion, peace and stability.

Show more
11.4 million
population
26%
of people living in rural areas are poor
28%
of children under 5 and pregnant and nursing women suffer from anaemia
Download country brief

What the World Food Programme is doing in Tunisia 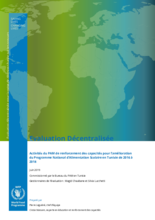 Achieving Zero Hunger is the work of many. Our work in Tunisia is made possible by the support and collaboration of our partners and donors, including:

Find out more about the state of food security in Tunisia