With over 182 million people, Nigeria is the most populated country in Africa and the seventh largest in the world. The annual growth rate of the population is approximately 2.7 per cent, and more than half the population are under 30 years of age.

Nigeria is the 10th largest producer of crude oil in the world and achieved lower-middle-income status in 2014. However, conflict in its Northeast region has displaced over 2 million people and left another 8.7 million food insecure in Borno, Adamawa, and Yobe states. Three million of them are in Borno State, the epicenter of the insurgency.

The country’s human development indicators are poor. Persistent poverty affects more than half the population, most severely in the Northeast and Northwest regions. In addition, Nigeria is also subject to periodic droughts and floods; this has had an adverse impact on agricultural output and increased the vulnerability of populations, especially in rural areas.

Around 110 million Nigerians, representing over 60 percent of the total population, live below the poverty line. Primary school enrolment rates are estimated at 70 percent for boys and 60 percent for girls.

Since 2014, insurgent activities have added pressure to a fragile resource environment, deepened insecurity, hampered development and heightened the food and nutrition insecurity of vulnerable women and children.

While renewed government military initiatives against the insurgency are being successful, Boko Haram attacks using improvised explosive devices and person-borne explosive devices (IED/PBIED) continue in Maiduguri City and other towns in the Northeast.

Beset by violence, social disruption and economic hardship, thousands of Northeastern Nigerian families are in desperate need of food assistance.

The humanitarian situation continues to worsen as most displaced people do not have adequate access to food, water and other essentials.

Since May 2015, the World Food Programme (WFP) has supported national and state emergency agencies and humanitarian partners to assist people displaced by conflict. WFP has been transferring operational know-how, providing technical support to strengthen food security data collection, enhancing the emergency response at displaced sites (including through food distribution), and providing safe and reliable air transport services to the humanitarian community.

In November 2016, with support from UNICEF, WFP launched a joint Rapid Response Mechanism (RRM) to supply food, nutrition and health support to people in hard-to-reach areas in Borno and Yobe states. The RRM includes extensive use of helicopters and the pooling of logistics and telecommunications resources across the humanitarian community.

Throughout 2017, WFP has been distributing food and cash assistance (including mobile phone-based transfers) to 1.2 million people monthly in Yobe, Adamawa and Borno, the states hardest hit by the crisis. Those receiving assistance included displaced people living in camps or host communities, as well as vulnerable members of host communities and people returning home after months of displacement.

What the World Food Programme is doing in Nigeria

WFP uses either food or cash transfers to support displaced people living in camps or with host communities, as well as vulnerable host populations. Throughout 2017 and 2018, WFP assistance reached 1.2 million people every month. 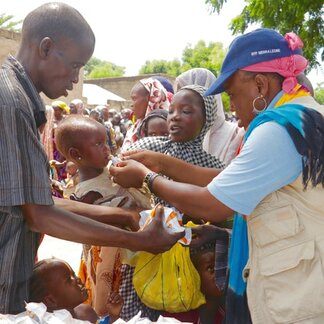 WFP assists with specialized nutritious food children under 5 at risk of malnutrition, and pregnant and nursing women. Jointly with UNICEF and ACF, WFP delivers an integrated package of essential health and nutrition services to prevent and treat acute malnutrition. Surveys in IDP camps in Maiduguri, Borno state, show a dramatic drop in malnutrition rates. However, these still remain high in more remote areas. 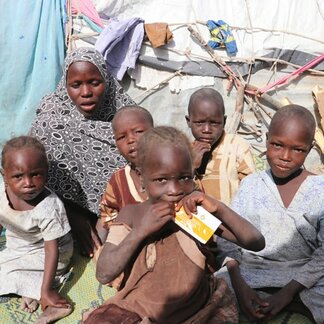 In collaboration with the Nigerian Government and other partners, WFP is preparing strategies to combine short-term assistance with longer-term interventions to build people’s resilience. 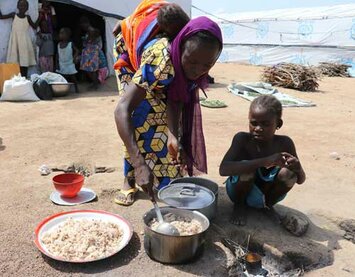 WFP supports the humanitarian community in northeast Nigeria in addressing the main logistics and telecommunication gaps, including storage augmentation in key operational areas. 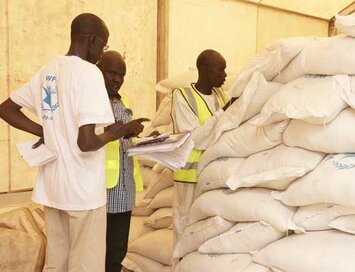 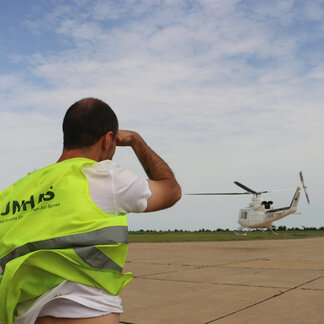 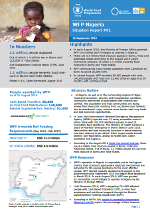 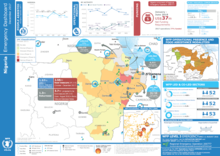 WFP in 2020: Conflict, climate change, coronavirus and the Nobel Peace Prize... in pictures

Nigeria: ‘People can live in hunger right in the middle of plenty’

Lagos, Nigeria: Coronavirus is the least of concerns in the ‘Venice of Africa’

Achieving Zero Hunger is the work of many. Our work in Nigeria is made possible by the support and collaboration of our partners and donors, including:
Canada European Commission France Japan Sweden
Switzerland UN Country Based Pooled Funds United Kingdom USA
View all

Find out more about the state of food security in Nigeria