Following the formation of the first civilian government in early 2016, Myanmar is still facing complex political and socio-economic challenges which compromise the achievement of the Sustainable Development Goal to end hunger (SDG 2).

Myanmar remains one of the least developed nations in the world with an estimated 38 percent of the population living near or below the poverty line. Most people in the country struggle with physical, social and economic access to sufficient, safe and nutritious food with women, girls, the elderly, persons with disabilities and minorities affected most due to discrimination, including customary laws and traditions.

High food insecurity rates are particularly prevalent in isolated zones of Chin, Kachin, Rakhine, Sagaing and Shan predominantly inhabited by ethnic minorities, as well as in many areas of the Delta and the Dry Zone with higher population densities.

Ethnic conflicts and violence have left hundreds of thousands of people displaced in Kachin and Shan since June 2011 and in Rakhine since August 2012. The attacks on the border outposts in October 2016 and August 2017 and ensuing violence forced nearly 700,000 Muslims living in Rakhine State to flee Myanmar and seek refuge in neighbouring Bangladesh, causing a humanitarian crisis.

The country’s susceptibility to natural disasters also leads to massive displacement and destruction of livelihoods, crops and other food sources. Since 2002, more than 13 million people have been affected by natural disasters, including severe tropical cyclones Nargis in 2008, Giri in 2010, Komen in 2015 and Mora in 2017, which caused major flooding.

Nearly one in three children under the age of 5 suffers from stunting (short height for their age) while wasting (underweight for their height) prevails at 7 percent nationally. Myanmar is one of the world's 20 high tuberculosis (TB) burden countries. It is also among the 35 countries accounting for 90 percent of new HIV infections globally. Men and boys are more likely to suffer from HIV due to seasonal migration to border areas where unsafe drug injection and high-risk sexual behaviour are common. Education remains inadequate at all levels. Seventy-four percent of children who enrol complete primary school, but less than half complete middle school and even fewer progress onward. Girls are more likely to drop out of school at an early age to serve family needs.

Despite challenges, Myanmar has achieved the Millennium Development Goal of halving hunger by 2015 and reached lower-middle income country status in the past decade. As the second largest country in Southeast Asia, Myanmar continues to be one of the fastest growing economies in the region. Industry and services continue to accelerate with increased foreign investment, rapid expansion of the telecommunications sector and emerging financial service providers.

WFP implemented its first operation in Myanmar in 1978 and established an office in the country in 1994. WFP’s work on Myanmar seeks to implement nutrition-specific and nutrition-sensitive food assistance supporting crisis affected people to meet their food needs; enhance the resilience of vulnerable communities by strengthening the ability of government institutions to provide social protection programmes; and improve nutrition.

What the World Food Programme is doing in Myanmar 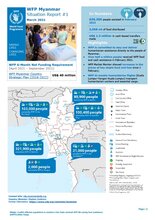 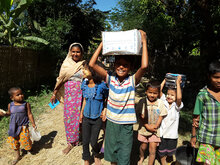 What WFP is doing in Myanmar 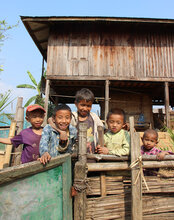 Where WFP is working in Myanmar 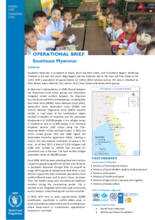 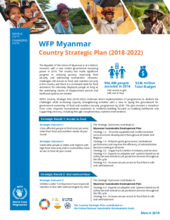 Achieving Zero Hunger is the work of many. Our work in Myanmar is made possible by the support and collaboration of our partners and donors, including:

Find out more about the state of food security in Myanmar