Brenda Lopez* pulls the legs of her husband’s jeans inside out and rolls them up as tightly as she can. Juan shoves them  into a small grey shoulder bag along with two shirts and some underclothes. After zipping the bag shut, he adjusts his baseball cap in the mirror and sits expectantly down on the edge of their bed, waiting for the coyotes – as people smugglers are known in Central America – to call.

The spike in prices resulting from the Ukraine war, the effects of the climate crisis and the long-lasting impact of the COVID-19 pandemic are exacerbating existing poverty, driving a wave of migration from the Lopez’s village of  Xelam. A farming community of around 525 people  in the mountainous Huehuetenango department of Guatemala, Xelam has chronic malnutrition rates of up to 67 percent – similar to those in surrounding villages.  As a result, Huehuetenango is currently one of the departments with the most emigration to the United States and second only to the capital, Guatemala City, for total remittances received.

“When you leave, you feel sadness thinking that you are leaving your family because of poverty. You feel a lot of nostalgia and fear of facing many dangers, because you do not know if you will return alive," Juan says. "Life is not waiting for you to be strong. It forces you to be strong and have the courage to fight and migrate to another country to break out of poverty.”

There are several ways migrants from the so-called “dry corridor” countries of El Salvador, Honduras, Guatemala and Nicaragua try to make the dangerous journey to the United States (US). Many try to make it on their own by foot, carrying a few belongings, or join “caravans” – travelling in groups of hundreds or even thousands.

But another, more insidious, mechanism has become the most established in Guatemala – the same one Juan Lopez and his family found themselves pulled into like quicksand. Using their home as collateral to borrow around US$13,000 from loan sharks, they paid a coyote for three attempts to illegally sneak Juan into the US. When we meet him, he has already been captured and deported twice from the US, and is now waiting to embark on his third and final attempt. If it fails, he and his family will lose their home.

"When I decided to leave, I made a deal with the coyotes and advanced them some money," Juan explains. "I left and was deported. But on top of that, I was in debt because you need to leave money for your family and take some with you for the trip. To pay that debt and not lose the house, which guarantees the money, I decided to migrate again and insist until God allows me to. This is the only way to get out of debt and poverty.”

It is not uncommon for people to fall into this trap in a place like Xelam, where even the walls talk about the "American Dream", with colourful murals depicting the statue of liberty, jet planes and a city scape of skyscrapers with Miami Florida written above it.

However, there is an alternative to the relentless cycle of climate extremes, hunger and migration in Xelam and Central America's dry corridor. The World Food Programme (WFP) has introduced new farming techniques, built water reservoirs and launched wider projects that help people adapt to changes in the climate.

Farmer Felipe Cox lives with his wife Lila García and four sons. Until recently, he struggled to feed his family as erratic rainfall and damage from hurricanes made it impossible to survive on farming. At the end of 2021, he decided to migrate to the US. But after joining a WFP project he is now able to support and feed his family at home. The project helps Felipe and the community with soil conservation and home gardens, which produce vegetables like mustard, coriander, radish and cauliflower. The project also provided him with a new variety of potato that yields twice a year instead of only once.

I follow Felipe and his sons up a steep hill. Out of breathe and heart pounding from the altitude, I watch his children scampering up ahead of me until they almost disappear. When I finally catch up, I see what a big difference something as seemingly simple as a potato variety can make. Felipe and his sons are pulling handful after handful of potatoes from the rich soil – enough to feed the family and sell at the local market. He no longer needs to think about leaving home.

*Names have been changed 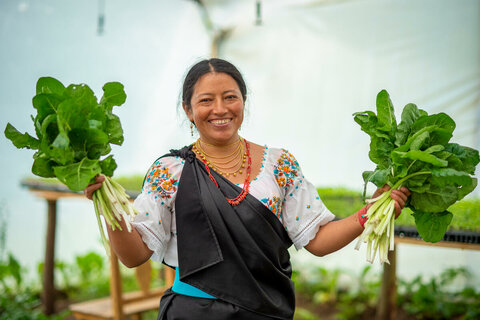 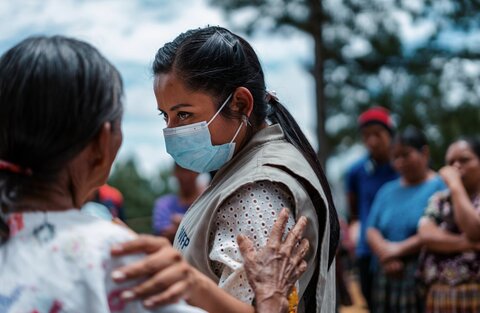 In Guatemala, Indigenous is ingenious when it comes to climate change