Nepalgunj, Nepal – British Minister for International Development Baroness Elizabeth Sugg today attended the groundbreaking ceremony of the Forward Logistics Base in Province 5, managed by the World Food Programme (WFP) in Nepal, in close cooperation with the Civil Aviation Authority of Nepal and the Ministry of Home Affairs. The symbolic groundbreaking ceremony marks the beginning of construction of the base.

This base in Nepalgunj is one of the seven that will be built to support provincial and national emergency response operations across the country. Once completed, each of the seven provinces will have its own base, forming a network to improve storage and transport of relief goods to remote locations in times of disaster.

The construction follows the success of the UK-funded Kathmandu Humanitarian Staging Area, which was launched one month before the devastating 2015 earthquake as the central humanitarian hub for emergency preparedness and response. The prompt activation of the facility saved 21 days in response time, which meant relief supplies reached the people in desperate need faster.

“Here in Nepal, natural disasters like floods and landslides are a significant threat and the poorest communities are the most vulnerable,” said Baroness Sugg at the ceremony. “UK aid is working with WFP to build a new emergency response hub allowing us and the Government of Nepal to act faster and save more lives when it’s needed most.”

The ceremony that took place at the Nepalgunj airport was also attended by the Deputy Mayor of Nepalgunj sub-metropolitan city together with senior officials from WFP.

“Investing in emergency preparedness ahead of disasters can save time and lives. Logistics bases at provincial level, together with capacity building of humanitarian agencies and government will help each province respond to disasters faster and better,” said Pippa Bradford, WFP Nepal Representative and Country Director. “We are thankful to the Government of the United Kingdom for a generous contribution of US$ 4.2 million for this important initiative.”

WFP has been supporting the Government of Nepal since 2013 to build a national logistics network to strengthen emergency preparedness and response capacities for the country. 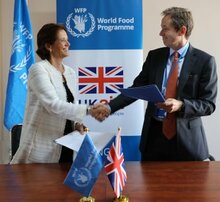