Considered one of the best goalkeepers in the history of football Gianluigi Buffon played 176 matches for Italy’s national team – 80 of them as captain.  In a stellar 20-year career he captained Italy’s leading football team Juventus and was named UEFA goalkeeper of the year five times. Buffon holds the record for the longest streak without conceding a goal in the history of Italy’s Serie A championship.

“On behalf of the nearly 90 million people we serve each day, I want to thank Gigi Buffon for joining our cause as Goodwill Ambassador. The courage, skill and dedication that he brought to every match will now be applied to helping the hungry and vulnerable all over the world. I believe he will help WFP bring even more teammates to our Zero Hunger squad”, said David Beasley, Executive Director of World Food Programme.

“I couldn’t be more proud to be named Goodwill Ambassador for WFP, the United Nations agency that fights hunger worldwide and reaches the millions of vulnerable people. I am enthusiastic to accept this nomination, and share such a hopeful message, as I bear witness to the tireless efforts of WFP staff each day in the field. Their work deserves to be known as do the stories of people so much less fortunate than us. We can beat hunger when we work as a team!” said Gianluigi Buffon.

“We need Gigi’s amazing outreach to make sure the world knows about the millions of people suffering from hunger and the work that WFP does to change their lives”, says Marina Catena Chief of the Goodwill Ambassadors and Brand Building.  “Football is a universal language. One day I visited an orphanage in Baghdad: we did not speak the same language. But once the children knew I was Italian, they started to chant the names of Juventus players: “Trezeguet, Buffon, Del Piero’ and the ice was broken.”

As a goalkeeper Buffon is the last line of defence for his team. As goodwill ambassador, he’ll be helping WFP lead the attack on hunger which afflicts 821 million people around the world.

In his role as WFP Goodwill Ambassador, Gianluigi Buffon will have the opportunity to travel to some of the 83 countries where WFP helps communities rebuild shattered lives and livelihoods. He will see first-hand what WFP does to save and change lives and use his immense reach to engage his millions of supporters in working to achieve a Zero Hunger world by 2030. 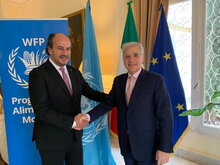