ADDIS ABABA –  The United Nations World Food Programme (WFP) is facing a major funding shortfall over the next six months threatening its ability to meet the critical food and nutrition needs of millions of food insecure Ethiopians and refugees.

The Government of Ethiopia, WFP, and other partners are struggling to alleviate the country’s hunger crisis. The extended combined effects of conflict, drought, flooding, desert locust invasions, market disruptions and high food prices, and the COVID-19 pandemic have left an estimated 13.6 million people food insecure.

“Timely and complete food and nutrition support is critical to alleviating the suffering of millions across Ethiopia. In addition to the severe challenges facing conflict-impacted populations in many regions, we are deeply concerned about climate-related vulnerability and food insecurity in dry lowland areas,” says WFP Representative and Country Director, Dr. Steven Were Omamo.

“There is food available in the country. But if WFP doesn’t receive commitments of new funding in the coming weeks, we will be unable to purchase and mobilise this food to prevent millions from falling into severe hunger and hardship by early next year,” warns Dr. Omamo.

Record-high levels of acute food insecurity are expected in Ethiopia through at least mid-2022, with northern, southern, and south eastern parts of the country of highest concern, according to the latest Ethiopia Food Security Outlook (FEWSNET, October 2021 – May 2022).

In northern Ethiopia, the food security situation in all three regions of Afar, Amhara and Tigray is already critical and will worsen if conflict-induced interruptions to humanitarian aid continue. The impacts of ongoing conflict – including continued disruption to trade flows and minimal economic activity – will come on top of already significant losses to food and income.

International donor partners have stepped up and committed more than ever before to WFP’s response in Ethiopia, but the level of funding has not kept pace with rising needs. Funding shortages have already forced ration cuts for some 710,000 refugees across the country and 2.4 million food insecure people in Somali region. Refugees are now receiving 60 percent of the required kilocalories per person/day while food insecure families in Somali region are receiving 10 percent less cereal per person, per month.

WFP’s staff are guided by the principles of neutrality, impartiality, humanity, and independence. WFP is working throughout Northern Ethiopia with the Federal government and regional authorities to reach populations affected by the conflict, wherever possible, and calls on all parties to respect the organization’s assets, staff and commodities, and access to areas of need.

No food, no fuel, no funding: WFP's northern Ethiopia operations grinding to a halt 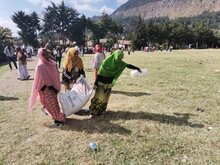