“It’s such an honour to have Ambassador Trine and Deputy Head of Mission, Hilde join us,” says Brenda Barton, WFP Country Director in Sri Lanka. “Today is such a momentous occasion for us as we are recognised for our role in fighting hunger and fostering peace.”

The Nobel Peace Prize will be presented to WFP at a virtual awards ceremony and could be viewed globally on the Nobel Prize site or streamed live on the WFP Sri Lanka Facebook page. 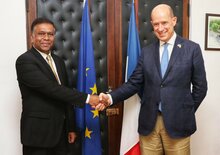