ALGIERS – The United Nations World Food Programme (WFP) welcomes a contribution of US$560,000 from the US State Department to support WFP’s innovative fish farm in Algeria’s Tindouf refugee camps. This is the second US contribution to WFP’s activities in Algeria that provide refugees with livelihood opportunities and enhance food security in the camps.

The US contribution will allow WFP to increase access to fresh fish produced in the world’s first fish farm in a refugee camp, with an expected annual production of 21,000 kg of tilapia fish. Tilapia, a resilient fish that can withstand high temperatures, is raised in cycles of 8 months in several basins. The farm was built in partnership with French non-government organisation, Triangle Génération Humanitaire, using funding from the State Department’s Bureau of Population, Refugees and Migration. WFP has been testing the technique since February this year and trained a team of 15 refugees.

“A fish farm in the desert seems like a crazy idea at first but the technique has been successfully implemented under similar conditions in Algeria and the last months have shown that it can be replicated in these refugee camps where ground water is available,” said WFP Representative and Country Director in Algeria Imed Khanfir. “WFP is very grateful to the people and Government of the United States of America for their continued support that provides Sahrawi refugee women and men with opportunities, and help WFP find innovative food solutions.”

For more than 40 years, the refugees from Western Sahara have been living under extremely harsh conditions in five camps in the desert, near the Algerian town of Tindouf. Despite regular food assistance, malnutrition rates and anaemia prevalence remain a challenge, especially among women and children. Refugees rely almost entirely on WFP monthly food rations and have limited access to fresh produce.

“This fish farm is a successful addition to WFP’s low-tech hydroponic units introduced in the camp two years ago allowing refugees to grow fresh animal fodder in just seven days,” said Khanfir. “These food solutions can be replicated anywhere in the world to support the food needs of vulnerable families living in harsh environments.’’

Since 2016, WFP has been complementing its traditional kind of food assistance with innovative complementary activities that provide refugee women and men with livelihood and resilience opportunities designed to increase access to fresh, nutritious food. WFP has been supporting refugees from Western Sahara in Algeria since 1986.

WFP welcomes €5.8 million from the European Union to support Sahrawi refugees in Algeria 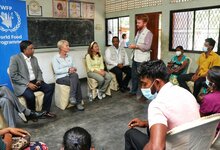