BAGHDAD – The United Nations World Food Programme (WFP) and Iraqi Ministry of Trade launched the ‘Tamwini’ (My Food Ration) smartphone application in Najaf, which will roll out for 1.6 million people across the governorate.

The Tamwini app allows families to easily update – directly on their smartphones – their information for the Public Distribution System for food rations (PDS). The initiative is part of the digitalisation of the PDS, which WFP and the Ministry of Trade launched in January 2019 and provides added benefits during COVID-19 pandemic as people can update their information – for example in the case of a newborn or a marriage – directly on their phone from the safety of their homes instead of visiting PDS offices in person.

“As well as providing a practical, time-saving solution for families benefiting from the scheme as well as government staff, the Tamwini app is especially useful in a governorate such as Najaf, where some communities live far apart, and updating personal family data means longer journeys to PDS offices,” said Iraqi Minister of Trade Alaa Ahmed al-Jubouri. “Together with WFP and partners, since July 2020 we have successfully trialled Tamwini in two neighbourhoods in Baghdad and Mosul. The rollout to 1.6 million people in Najaf is a milestone towards expanding the use of the app across the country.”

“The strong partnership between WFP and the Ministry of Trade is the foundation for this innovation: from the smartcards that are being introduced across Iraq to replace paper cards, iris scanning verification, and now expanding access to the Tamwini app to people across Najaf governorate,” said WFP Representative in Iraq Abdirahman Meygag. “By creating better solutions and services for families in Najaf, we are moving towards enhancing social protection for the entire country.“

A robust Public Distribution System that is constantly updated – in real time – will also allow for prioritisation of the most vulnerable families. Under WFP’s social protection programme, the PDS digitalisation is also providing the foundation for other government Ministries to align and create one single, social register of families most in need of support.

Tamwini can be downloaded by Najaf residents by collecting a dedicated QR code card from their PDS branch in Najaf – just one time. Scan the QR code with a smartphone – one per household – and the option to download Tamwini appears via the Google Play Store. Soon, Tamwini will also be available on the iOS App Store. Each QR code corresponds to the family’s individual electronic PDS (‘ePDS’) number. 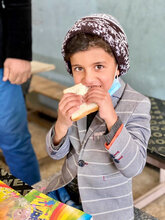