SANA’A – A massive expansion of humanitarian assistance by the United Nations World Food Programme in Yemen this year has alleviated the worst suffering in Yemen and so far prevented famine, but over 11 million people continue to face a daily struggle to find enough food, according to WFP’s latest food security monitoring data .

WFP has this year achieved an unprecedented expansion of food assistance in Yemen, scaling it up by 50 percent – from reaching 8 million people at the beginning of the year, WFP now provides food assistance to some 12 million people per month. Meanwhile, food assistance has been doubled to the worst-hit areas where conflict and economic collapse had left nearly 240,000 people living in famine-like conditions. A recent food security assessment showed that catastrophic levels of food insecurity had been reversed in 29 of the 45 most hunger-stricken districts[1].

While the most acute levels of food insecurity have subsided, the threat of famine persists, and humanitarian assistance remains a lifeline for millions. In Hajjah, Sa’ada, Hodeidah, Al Bayda and Ad Dhale – all areas that have seen fierce fighting this year – WFP is providing food assistance to over half the population to prevent them slipping into worse levels of hunger.

Nearly five years of conflict have wrought havoc on Yemen’s economy, pushing the price of basic goods out of reach for many. The cost of some staple foods has decreased over the last 12 months but WFP analysis shows around 22 million people[2] are still forced to skip or reduce meals to make their meagre food stocks last.

“Our food assistance has saved many children, women and men from the brink. But they’re not safe yet. Support for Yemen must continue,” said WFP Yemen Country Director, Laurent Bukera. “Yemen needs peace - a lasting peace that will allow the country to rebuild.”

In 2019, WFP provided $35 million in cash transfers to families using their biometrics to redeem their entitlements at banks. Such assistance works in areas with functioning markets and where the agency can deploy biometric verification. Some 3 percent of WFP’s beneficiaries in Yemen are served in this way. In other areas, the agency continues to provide food rations and vouchers with which they can redeem food from WFP’s network of traders.

WFP has centralised all beneficiary lists and boosted monitoring nationwide to limit external influence on humanitarian work. The agency continues to expand its use of biometric registration which provides valuable digital assurance that food assistance is reaching those most in need. WFP’s biometric registration programme in Yemen is its most ambitious such undertaking anywhere in the world.

WFP has also expanded nutrition support and school feeding to protect Yemen’s children from malnutrition and hunger. This is the generation that Yemen will rely on to rebuild when the devastating conflict comes to an end. It is essential that they are able to realise their full potential.

WFP’s Yemen operation is its largest humanitarian response in the world and is set to remain so in 2020.

Statement on Yemen by Principals of the Inter-Agency Standing Committee 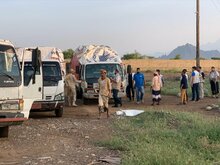