Mohamed Ismail Hamza, a Sudanese national who worked as an Aviation Associate in El Geneina Area office, was travelling with his wife Halima and their two children, Hamza (4) and Huzaifa (2). The plane crashed shortly after taking off from El Geneina airport in West Darfur on Thursday 2 January. It was bound for the Sudanese capital, Khartoum. 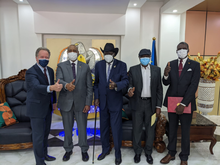