ADDIS ABABA – The United Nations World Food Programme (WFP) has resumed its operations in the Tigray region of Ethiopia after fighting halted the emergency response last week. However serious challenges are threatening the entire humanitarian response in the region.

On Thursday, WFP reached 10,000 people displaced by conflict with emergency food assistance in the Adi Nebried area and gave nutritionally fortified food to 3,000 women and children, many suffering from malnutrition, in Endabaguna. WFP continues distributions today, hoping to reach 30,000 people in Northwest Tigray by the weekend.

“We have the teams on ground, trucks loaded and ready to go to meet the catastrophic food needs in the region. What we need now is free, unfettered access and secure passage guaranteed by all parties to the conflict so we can deliver food safely,” said Tommy Thompson, WFP’s Emergency Coordinator based in Mekelle.

Families are receiving some of the last of WFP’s food stocks. Lives will be lost if supply routes into Tigray do not fully open and parties to the conflict continue to disrupt or endanger free movement of cargo for WFP and other emergency responders. Two major bridges leading into Tigray from Gondar were destroyed on Thursday.

While WFP is adjusting its supply lines and exploring alternative routes into Tigray, the destruction of the bridges had an immediate impact on moving food into the region from Gondar. WFP requires safety and security for our staff, our partners, the people we serve and the assistance we provide to reach millions of people in need of emergency food and nutrition support when hunger peaks in the coming months.

No WFP flights for UN and Non-Governmental Organization humanitarian staff have been authorized and civilian flights to Tigray have been stopped by the Ethiopian aviation authority since 22 June, meaning humanitarian staff cannot be rotated in and out of Tigray by air. Banks are closed, and fuel and electricity are in short supply.

Note to the editor
Photos availablehere

Statement on crash landing by UNHAS flight in Ethiopia 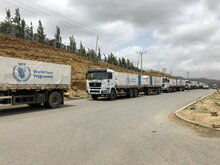